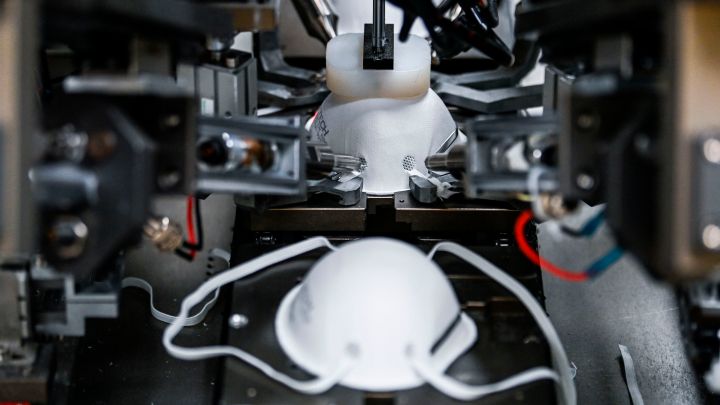 COPY
The shortage of medical masks in 2020 was one sign that the U.S. needs to improve the security and resilience of its supply chains. Chandan Khanna/AFP via Getty Images

The shortage of medical masks in 2020 was one sign that the U.S. needs to improve the security and resilience of its supply chains. Chandan Khanna/AFP via Getty Images
Listen Now

Problems with the current system were exposed by the pandemic, when, for example, we saw shortages of protective gear like medical masks and in the auto industry, which is hurting for semiconductors. These products are mostly made in Asia.

In the order, the administration promised to examine some of those critical sectors to find out what the vulnerabilities are and come up with ideas to fix them.

The action was spurred not just by the face mask shortfall during the pandemic. The order is about the future of U.S. competitiveness.

Improving the situation involves altering global supply chains. It won’t be easy, but there are tools we can use, said Steven Vogel, who chairs the political economy program at the University of California, Berkeley.

“It could be stockpiling certain things, in some cases it could be trying to create domestic manufacturing capacity where there isn’t in a particular niche,” Vogel said.

Practically speaking, that means public funding for research and development, or it could mean having the government promise to buy a strategic product. For example, the U.S. promised to buy COVID-19 vaccines before they were developed. That propped up pharmaceutical companies.

There are lots of other options. According to C.J. Muse at Evercore ISI, “It’s tax subsidies, it’s providing incentives to making investments here, so I would like to see Washington, D.C., get creative.”

In the past, the U.S. has relaxed antitrust rules to encourage companies that normally compete with one another to work together on research. When it comes to supply chains, making them reliable doesn’t mean going it alone.

Arthur Herman, senior fellow at the Hudson Institute, suggested: “Making a secure supply chain for critical industries doesn’t necessarily mean everything has to be made in the 48 states, or even the 50 states.”

Herman said that even the Pentagon relies on a handful of trusted countries like Canada and the U.K. to supply materials.

Asia’s highest-tech semiconductor manufacturers, for example, invested hundreds of billions of dollars and took multiple decades to get where they are today.