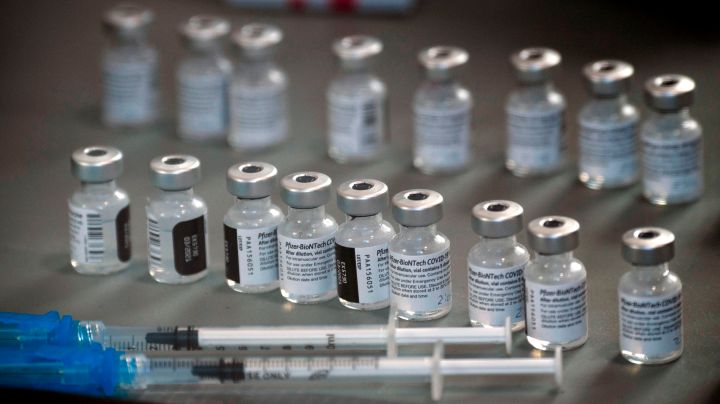 COPY
In vaccine making, one of the key bottlenecks is filling bottles quickly. Patrick T. Fallon/AFP via Getty Images
COVID-19

In vaccine making, one of the key bottlenecks is filling bottles quickly. Patrick T. Fallon/AFP via Getty Images
Listen Now

One by one, the chief executives of America’s COVID-19 vaccine makers promised in congressional testimony to deliver the doses promised to the U.S. government by summer. The projections of confidence come after months of supply chain challenges and companies falling short of year-end projections for 2020.

In vaccine making, one of the key bottlenecks is, well, the bottles. The vials that contain the drugs have to be filled, and that can only go so fast.

“It’s simply the throughput of finding the facilities that are able to fill,” said Clem Lewin, an independent vaccine consultant. “You need to qualify them because these are highly regulated products where safety is critical.”

But he said drugmakers that normally compete are now actually helping one another. For instance, Sanofi, whose vaccine is not ready for production, is filling vials for Pfizer. As is Novartis.

Perhaps the drug companies feel they have to collaborate.

“There is some discussion that they’re kind of reluctant,” said Anna Nagurney, supply chain scholar at the University of Massachusetts at Amherst. “But I think sooner or later if they’re promising to double the capacity, you have to keep your promises.”

Another efficiency gain is Moderna’s plan to squeeze 15 doses into a vial, instead of 10, Nagurney said. Some vaccine developers have struck deals with contract manufacturers for so-called fill-and-finish work.

But not every challenge has been solved.

Vaccines from Moderna and Pfizer, which deliver genetic instructions to produce virus proteins that trigger immune system responses, require special compounds called lipids. Certain lipids provide exterior protection for the RNA but were only manufactured in boutique quantities before the pandemic.

“We had never imagined that we were going to need these lipid nanoparticles in the quantities that we now need them,” said Prashant Yadav, supply chain scholar and fellow at the Center for Global Development. “Which means there are very few suppliers in the world, one or two.”

Vaccine company CEOs said they have found new lipid sources, but the specific details of these transactions are vague because supply chains are secret.

“If you’ve got a line on some really good material, or a supplier who is reliable and can provide at scale, you don’t want everybody else to know about that,” said Derek Lowe, a drug discovery researcher.

Two more doses of good news: Johnson & Johnson expects its vaccine to receive Food and Drug Administration authorization any day. And the Novavax version, which is expected to be scaled up quickly and affordably, is assumed to be close behind.