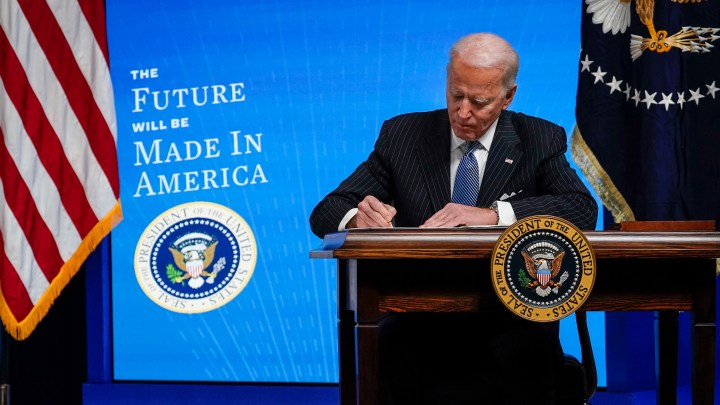 On Monday, President Joe Biden signed an executive order that can be summed up in four words: “Buy American, federal government!”

The order was based on a promise that then-candidate Biden made before the election. Flash back four years, and you could’ve said pretty much the same thing, substituting “Trump” for “Biden.” In other words, this is a pretty popular policy for politicians of all stripes.

Thing is, it’s not so easy to boost the amount of American-made goods the federal government buys.

The government can ask for a waiver if American-made products are too expensive.

But what counts as “American made”? Government rules and trade agreements set thresholds for just how much of an item has to be made in the U.S. for it to be considered American.

Layna Mosley, a professor of politics and international affairs at Princeton, said the Biden administration is making it harder to get around existing rules.

“There are too many loopholes, and it’s too easy to get a waiver,” she said. “So we’re going to tighten what counts as an American product. We’re gonna require more of a product’s components to be U.S. made.”

Those details matter a lot to U.S. industries that struggle to compete with global suppliers.

“You need to be thinking about that entire supply chain,” said Kevin Dempsey, president and CEO of the American Iron and Steel Institute, “and moving more of it back to the United States, rather than just moving the last point of final assembly back to the U.S.”

The Biden administration said it wants to incentivize manufacturers to do just that with the lure of more government contracts.