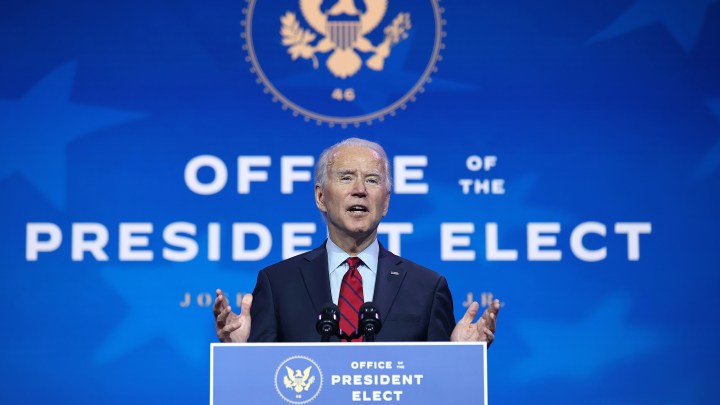 COPY
President-elect Joe Biden announces key members of his health team in December. Ramping up coronavirus testing will be one of his priorities. Chip Somodevilla/Getty Images
COVID-19

President-elect Joe Biden announces key members of his health team in December. Ramping up coronavirus testing will be one of his priorities. Chip Somodevilla/Getty Images
Listen Now

The incoming Biden administration plans a massive scale-up of COVID-19 testing, with a plan modeled on wartime efforts to mobilize industry for national emergencies. But such an effort may test the flexibility or resources of the private sector.

Ten months into the pandemic, public health advocates say the country still doesn’t have enough tests to go around and that results come too slowly. By the end of January, some 10 million tests will be performed every day, according to a recent report from the Rockefeller Foundation. But the country needs at least four times that many, said Mara Aspinall, the report’s co-author and a biomedical diagnostics professor at Arizona State University.

In particular, she said, it’s important to test individuals with no symptoms.

“Some recent studies would say 80% of people [with COVID-19] are asymptomatic,” Aspinall said. “So every day we hear, ‘I feel fine.’ But the reality is, you may still have COVID and you may still be infectious.”

Even people who receive the vaccine may require testing.

“It looks like the vaccines reduce symptoms to essentially zero, but it’s not clear whether the vaccine prevents you from getting COVID,” she said. “So you could be a carrier.”

To boost testing, the Biden team has proposed a federal Pandemic Testing Board, modeled after the War Production Board, which was created in 1942, weeks after the attack on Pearl Harbor. That board pushed U.S. companies to make weapons and ammunition and promoted the role of American workers on the homefront.

“The machine guns could not be fired and the planes could not fly without the painstaking effort of millions of desk workers and factory workers,” War Production Board Chairman Donald Nelson, a former Sears, Roebuck executive, said in a 1944 promotional video.

The board compelled Chrysler to make tanks and Ford to make bombers, among other companies. It centralized the buying of materials so companies and states didn’t compete with one another. That was a problem in a previous war.

During the Civil War, purchasing agents from various Union states fended for themselves and created inefficiencies, historian Mark Wilson of the University of North Carolina at Charlotte said.

“So they might go to London, and there might be agents from 10 different states trying to scare up some scarce muskets,” Wilson said. “They’d be competing against one another for scarce supplies.”

As for the Biden team, it has provided few specifics on its testing board’s plans. One option advocated by some groups is for the federal government to build new plants to manufacture test kits, machines and supplies. The feds made similar investments during World War II to jump-start production of synthetic rubber because natural rubber supplies from Asia were controlled by the Japanese army.

The U.S. government “owned a massive amount of new industrial plant,” Wilson said. “And they turned to private companies to manage or operate these plants.”

To encourage testing companies and equipment makers to make more products, the government could promise to buy everything that rolled off factory lines. That could benefit small firms in particular.

“Startups that are working on things like new testing that we want to upscale here, they do not have the financial wherewithal to make those investments without a guaranteed buyer,” said Dr. Irwin Redlener, a Biden adviser and head of Columbia University’s Pandemic Resource and Response Initiative. “Which should be government.”

Of course, testing can’t be done without essential materials like test tubes, proprietary plastic parts and nasal swabs — all of which “remain in critically short supply,” according to the Rockefeller Foundation report.

The government could help clear up the murky supply chain.

“Making sure that we are keeping track of which supplies are getting low, communicating it effectively so that states and localities and people who are using these tests can really plan around potential shortages,” said Christina Silcox, managing associate at Duke University’s Margolis Center for Health Policy.

More controversially, the White House has the legal authority to force companies to give Washington what it wants. If the government wants to buy testing machines from a certain company at a certain time, it can.

“It jumps the line,” said Jerry McGinn, former head of contracting at the Pentagon and executive director of the Center for Government Contracting at George Mason University. “And prioritizes that production to be done first, before anything else. That’s been something regularly used throughout the pandemic.”

Still, intervention in the economy can bring trade-offs. If a company expands test production now, can the government guarantee a smooth transition back to its normal operations?

“I think the answer, unfortunately, is no,” McGinn said. “After World War II, we ramped down dramatically companies that had been building ships. I’m sure they had to lay off workforce, and some of it’s unavoidable.”

Even in wartime, company executives have been leery of a government that steps too far into the private economy. An overly aggressive Biden White House approach to testing could shock the body politic. Over the past couple of generations, both the Democrats and the Republicans “have embraced a more deregulatory approach to capitalism,” historian Mark Wilson said.