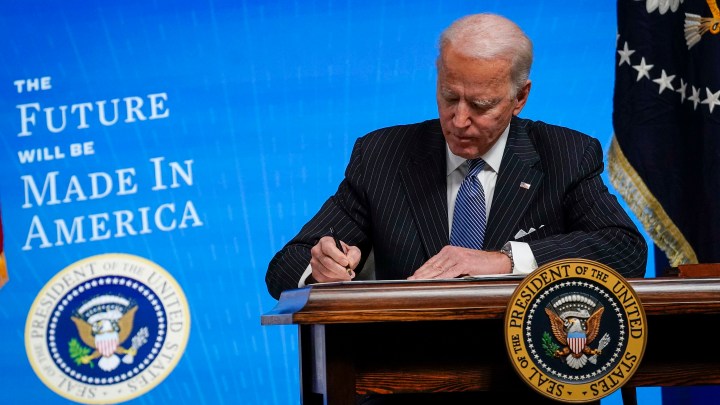 President Joe Biden signed an executive order this week imposing tougher rules on how government contracts are awarded in the hopes of increasing the amount of products and services that are made in the U.S. That, he hopes, in turn, will strengthen American manufacturing.

It’s something the Trump administration tried to impose, as well, with limited success. So what do these new rules mean for American businesses?

Virtex is an Austin, Texas, company that manufactures high-tech electronic products for a bunch of different industries.

As a result, lots of business runs through the Department of Defense.

Biden’s “Made in America” order makes it harder for federal agencies to buy imported goods by requiring that more of a product be made from U.S. components to be considered “American.”

Heath said that could make things more complicated for companies like his.

“There’s a large portion of product that has been outsourced for years, where there really is no domestic source of supply anymore,” he said.

So even if he wanted to, there are some parts that go into his products that he can’t find here, no matter what Washington wants.

“There’s a large portion of any of these bills that is ‘feel good,’ but doesn’t necessarily directly impact manufacturers,” Heath said.

This isn’t the first administration to attempt to boost American manufacturing through federal contracts. Success has been fleeting, but using federal purchasing power for economic change can work, said Rachel Wellhausen at the University of Texas at Austin.

“The best example is the section 8(a) program, which targets minority-owned businesses,” Wellhausen said.

President Jimmy Carter signed the program into law in 1978.

“And it really has had a lot of success in moving, especially smaller government contracts, to these small businesses,” Wellhausen said.

The program’s stated goal is that 5% of government contracts be awarded to small businesses owned by people from socially and economically disadvantaged communities. Wellhausen said that’s possible because governments can consider more than price.

“Political goals are regularly part of government policy, especially when it comes to procurement,” Wellhausen said.

The “Made in America” program will include a website to help companies make bids, and Wellhausen said small businesses are going to need plenty of guidance to make sense of the process.