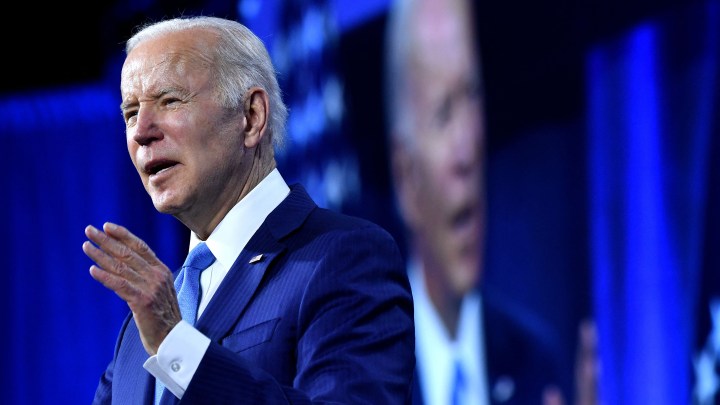 COPY
Though pressure is building for President Joe Biden to invoke the Defense Production Act to boost domestic oil production, some say the situation is not a national emergency — a requirement for tapping the act. Nicholas Kamm/AFP via Getty Images

Though pressure is building for President Joe Biden to invoke the Defense Production Act to boost domestic oil production, some say the situation is not a national emergency — a requirement for tapping the act. Nicholas Kamm/AFP via Getty Images
Listen Now

President Joe Biden is facing pressure to invoke the Defense Production Act to boost the domestic production of oil and gas.

Those calls are coming from members on both sides of the aisle in Congress and follow the administration’s ban on Russian oil and other energy imports announced last week.

We got a collective education in the DPA around this time two years ago at the start of the pandemic. But one takeaway still holds true: Even this emergency measure can take time to implement.

Over the years, the U.S. government has used the DPA to speed up access to all kinds of stuff — rare earth metals, military systems, ventilators for COVID-19 patients — all with the aim of protecting national security.

“The DPA gives the president extraordinary powers,” said Erik Gordon, a clinical assistant professor at the University of Michigan’s Ross School of Business. Still, “it doesn’t give him a magic wand.”

There’s no switch that the president or anyone else can flip to boost energy production overnight, Gordon said.

“No proclamation can make that happen faster than it’s physically possible. He doesn’t have the power to suspend the laws of physics.”

It’s also not clear if this moment qualifies as a national emergency. That’s a requirement for tapping the Defense Production Act, according to Jerry McGinn, a former acting deputy assistant secretary of defense whose portfolio included the DPA.

“Yes, the price of gas is really high. But domestic oil production is not threatened,” McGinn said.

But that production has to go through, yes, the supply chain. And if there’s anything the pandemic has taught us, said Julie Swann, professor and department head of industrial and systems engineering at North Carolina State University, it’s this: “It takes a long time to make supply chains resilient, including for oil and gas.”

And with average gas prices topping $4.30 a gallon in the United States, proponents insist it’s an investment worth making.