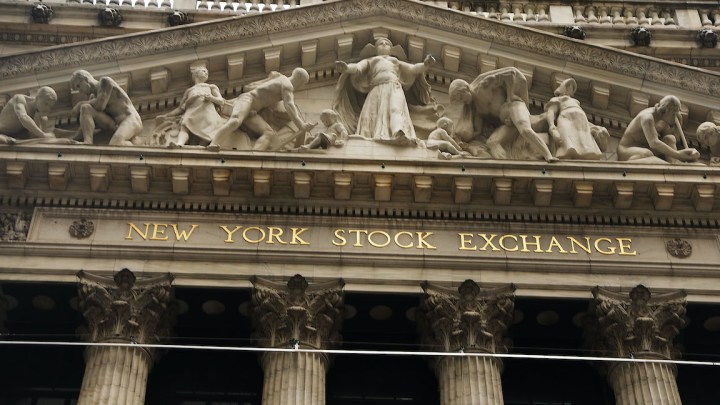 COPY
When bond yields go up quickly, it can spook the stock market. But stocks aren't the whole story. Spencer Platt/Getty Images

When bond yields go up quickly, it can spook the stock market. But stocks aren't the whole story. Spencer Platt/Getty Images
Listen Now

The yield on the 10-year Treasury note hit 1.35% on Monday, the highest it’s been in a year. And that’s drawn a lot of attention because this shift in the bond market is a sign that the rest of the economy is starting to change in important ways.

Investors are basically saying, if you want me to lock my money up in a bond for the next 10 years, you’re gonna have to sweeten the deal. They’re saying that because they see some things that might mess with the deal — things that might cost them some profit.

Inflation eats away at investment returns. So returns have to rise to make up for it, and that’s what’s happened with bonds. Investors are looking at a rebounding economy and thinking inflation’s gonna pick up.

Now, the Federal Reserve has pushed back on that idea even today, said Win Thin, global head of currency strategy at Brown Brothers Harriman.

“The main source of underlying inflation comes from the labor market, wages. And we’ve got 10 million out of work, 20 million collecting unemployment benefits. There’s literally no wage pressure right now,” he said.

But there’s still something else pushing up bond yields.

“The recent moves is being driven by optimism or rising expectations of further fiscal stimulus in the near term,” said Matthew Luzzetti, chief U.S. economist at Deutsche Bank.

So investors are thinking, huh, we are gonna actually get a big stimulus, and maybe it’ll actually work. Maybe it’ll work so well that the economy will grow so fast the Fed might have to step in sooner to cool things down eventually.

“Investors have been building expectations the Fed will raise rates even more aggressively than previously,” Luzzetti said.

Now, when bond rates go up quickly like this, it can cause some minor freakouts over on the stock market because now all of a sudden stocks just don’t look as good. We saw that in the past few days. But if you take a step back, these numbers from the bond market tell a story about the pace of recovery.

“The big thing has been the realization the economy is coming back very quickly and the anticipation that vaccine is creating significant ability for the economy to reopen,” Rieder said.

That’s good news for everyone, not just the bond market.