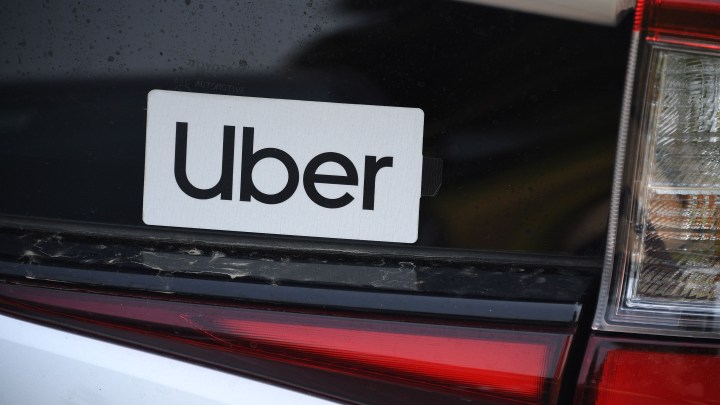 COPY
An Uber sticker on a car during a protest by ride-share drivers in 2020. How ride-share and other gig workers are classified remains controversial. Robyn Beck/AFP via Getty Images

An Uber sticker on a car during a protest by ride-share drivers in 2020. How ride-share and other gig workers are classified remains controversial. Robyn Beck/AFP via Getty Images
Listen Now

“Dasher.” “Tasker.” “Driver-partner.” Over the last decade, gig company executives have come up with all kinds of names for their workers.

Like much in the so-called gig economy, giving names to low-wage workers is nothing new. In 1975, Walmart CEO Sam Walton decided he was no longer going to call people at his stores “workers.” He was going to have “associates.”

The idea of giving fancy titles to low-wage workers spread. Today, Subway employees are called “sandwich artists.” At Disney World, managers call everyone from security guards to the person inside the Mickey Mouse costume a “cast member.”

But for gig companies, the question of what a worker is called isn’t just about marketing or trying to make a worker feel like part of the team. It is also essential to their business models.

These names bolster the companies’ arguments that their workers are contractors, not employees entitled to benefits and protections, said Caitlin Vega, a labor lawyer who works with unions. She said many of these invented names are a way for companies to create the illusion of distance from their workers by focusing on the tasks they perform.

Here’s how Vega summed up their argument: “ ‘They’re not our employees, they’re doing a discrete task. You know, they’re called “taskers” or “juicers” or some term that refers to the task, that is not integral to our business model of course,’ ” she said.

Uber has used terms for workers that boost the idea that they are independent, calling drivers driver-partners, a term the company uses in marketing and hiring documents. Companies like TaskRabbit put their invented worker names in the introductory videos for people who want to work for the company.

California’s Supreme Court, attorney general and Legislature agree there’s one accurate term for gig workers: “employees.” But gig companies spent over $200 million on Proposition 22, which legalized a new subemployee category for workers. Of course gig companies invented a name for it: “independent contractor-plus.”