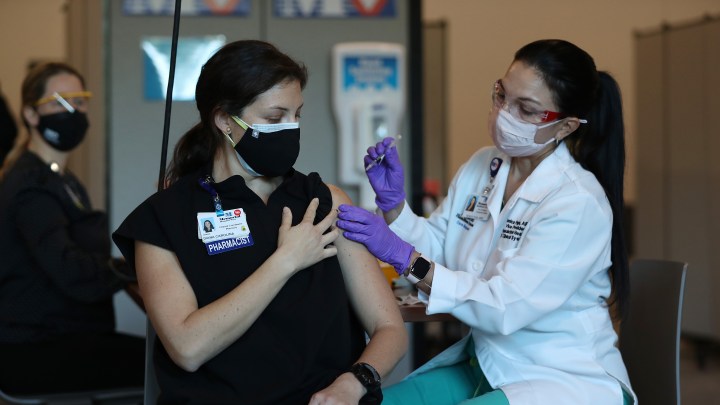 COPY
A pharmacist receives a COVID-19 vaccine in Florida. Vaccinations will probably free up consumer spending, but it won't be like turning on a light switch, in the words of one expert. Joe Raedle/Getty Images
COVID-19

A pharmacist receives a COVID-19 vaccine in Florida. Vaccinations will probably free up consumer spending, but it won't be like turning on a light switch, in the words of one expert. Joe Raedle/Getty Images
Listen Now

There are many headwinds holding the economy back right now. But, in the long run, this economy is on track to turn around. Vaccines are here, and nine or so months from now, our lives should be getting back to something like the way they were before the pandemic.

So here’s a guide to some of the signposts the economy will pass as it makes its way back.

Even with layoffs mounting and COVID out of control, consumers turned more optimistic heading into the new year.

“And then, the coronavirus vaccine getting out there, and sort of this idea that there is potentially an end to this long, long nightmare,” he said.

But it could be hard to sustain that optimism in the short term, said economist Robert Frick at Navy Federal Credit Union.

“If retail spending doesn’t climb back, if companies aren’t really investing because so many people have COVID, we can’t ignore how tough the next few months are going to be,” Frick said.

He predicts that six months from now, by midsummer, enough people will have been vaccinated that spending will pick up again. More people will be making restaurant reservations, going out to shop and buying airline tickets.

But, “a lot of people are assuming it’s going to be like a light switch,” Frick said. “Given the troubles with vaccine rollout and the number of people who don’t want to get vaccinated, there’s a light at the end of the tunnel, which is herd immunity. That’s going to take probably not until some time next year.”

Harvard economist Jason Furman said the economy is gonna have a lot of fuel to burn.

“People will have money. They actually had higher incomes after taxes and transfers in 2020 than normal, [and] they had lower spending,” Furman said. “So there will be about $2 trillion of dry powder — of excess saving — to spend.”

Furman said there will be two big problems, though: A lot of long-term unemployed people will be out of savings altogether, and a lot of businesses will have closed their doors for good.