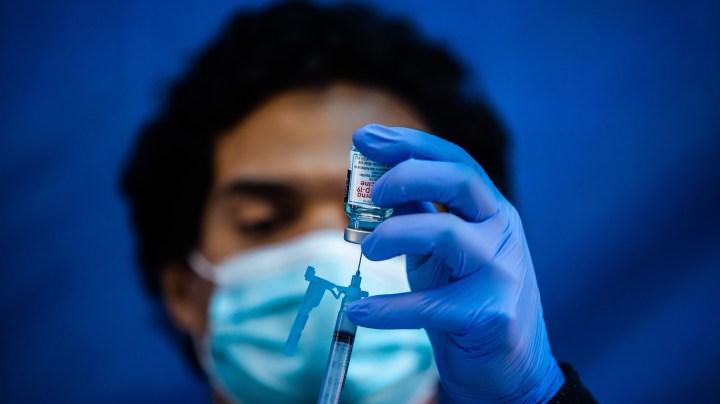 COPY
Increasing vaccine access around the world "is clearly the No. 1 policy priority," says Malhar Nabar of the IMF. "That's the only way we're going to really beat back this pandemic." Apu Gomes/AFP via Getty Images

Increasing vaccine access around the world "is clearly the No. 1 policy priority," says Malhar Nabar of the IMF. "That's the only way we're going to really beat back this pandemic." Apu Gomes/AFP via Getty Images
Listen Now

Vaccine access, the IMF said, “has emerged as the principal fault line along which the global recovery splits.”

So, what about the fact that here in the U.S. we’re hearing every day about the delta variant, rising cases and stalling vaccination rates?

The thing to know about economic forecasts, especially these days, is that there’s not a whole lot of certainty.

“Take all forecasts right now with a little grain of salt, because we don’t have any recent experience with a global pandemic,” said Ann Owen, an economics professor at Hamilton College.

The U.S. economy is getting better, but “if COVID evolves in a way that evades vaccines, then it would have a more serious impact on the economy,” she said.

The possibility of that is higher when so much of the rest of the world still doesn’t have access to vaccines, said Jen Kates at the Kaiser Family Foundation.

“What we know from COVID-19 is that what happens in other parts of the world affects us,” she said, in terms of public health and economically.

Things have already changed in the U.S. just in the six weeks or so since the IMF finalized its growth forecast in early June, said the IMF’s Malhar Nabar.

“And the fact that cases are rising as rapidly as they are is a worry because it could bring with it new forms of restrictions on activity, which would create more uncertainty and which would hold back the recovery,” Nabar said.

The virus is the No. 1 factor determining what’s happening with the economy. And Nabar said, because of that, increasing vaccine access around the world “is clearly the No. 1 policy priority. That’s the only way we’re going to really beat back this pandemic.”

And it’s the only way to return to normal levels of economic activity around the world.