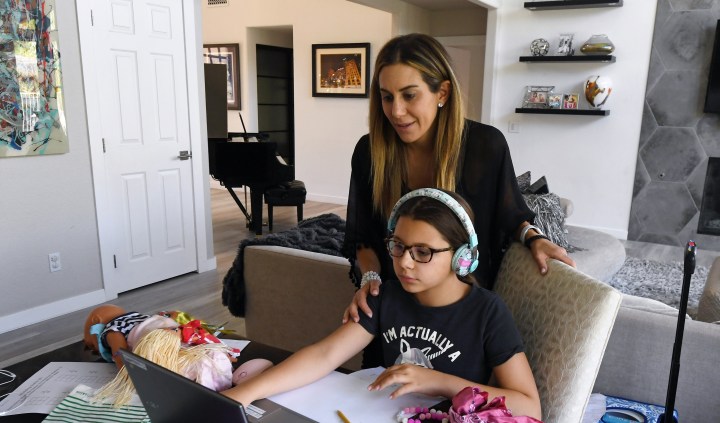 Some parents, because of child care responsibilities, left the labor force last year or had to reduce their hours at work. Ethan Miller/Getty Images

Some parents, because of child care responsibilities, left the labor force last year or had to reduce their hours at work. Ethan Miller/Getty Images

With the school year beginning and the U.S. experiencing an uptick COVID-19 cases, parents in the labor force face some potential challenges in the fall.

Just as businesses began re-opening this summer and economists felt optimistic about an economic recovery, COVID-19 cases began surging as the highly contagious delta variant became the dominant strain in the U.S.

“There’s no question that vaccine hesitancy, and the low vaccination rate that we have so far across the U.S., is making it difficult to forge ahead with this economic recovery,” said Alicia Sasser Modestino, an associate professor of public policy and urban affairs and economics at Northeastern University.

About half of the U.S. has been fully vaccinated, while 59% of people have received at least one dose.

Modestino said there was a lot of optimism about reopening the economy when vaccines first became available.

“But we’re at the point now if we don’t start moving the dial more in terms of increasing vaccinations, that we’re risking shutdowns because of the delta variant,” she said.

Consumer sentiment plummeted in early August due to the rise of the delta, and surveys show that people are more hesitant to travel and socialize now.

John Ricco, associate director of policy analysis at the Penn Wharton Budget Model, said that while we’ve had two very strong jobs reports in the past two months (the economy ended up adding 850,000 jobs in June and 943,000 jobs in July), he is concerned that the labor market might lose steam as we head into the fall.

Ricco explained that those who had stayed on the sidelines throughout the pandemic, such as those who were handling childcare duties, were expecting to send their children back to in-person learning.

“If schools are going remote or partially remote, or even the threat of going remote is on their mind, that might lead some people to be more hesitant about returning to the labor force,” Ricco added.

To ensure that schools are safe to resume full in-person learning, California is mandating that school staff at all California public and private schools get the COVID-19 vaccine (or submit to regular testing). It’s the first state in the country to do so.

We’ve seen in the past year how school disruptions can have ripples throughout the rest of the economy, Modestino said.

Before the pandemic began, women surpassed men as the majority of the labor force for the second time in history. But between August and September of last year, 865,000 women left the workforce. Black and Latinx women, who are overrepresented in service industries like hospitality and don’t have the option to work from home, have been hit particularly hard by the pandemic.

Modestino said parents will be faced with the possibility that someone in the classroom will test positive for COVID.

“Then you’re going to have to quarantine for two weeks and tell your employer that,” she added. “And at the same time, we have employers telling workers to get back into the office. This is the exact wrong time to be reducing the flexibility that we’ve seen in the workplace.”

“With the uncertainty that’s happening with schools and the potential for disruption, it really makes you wonder if we’re gonna see a second wave of women leaving the labor force in September,” she added.