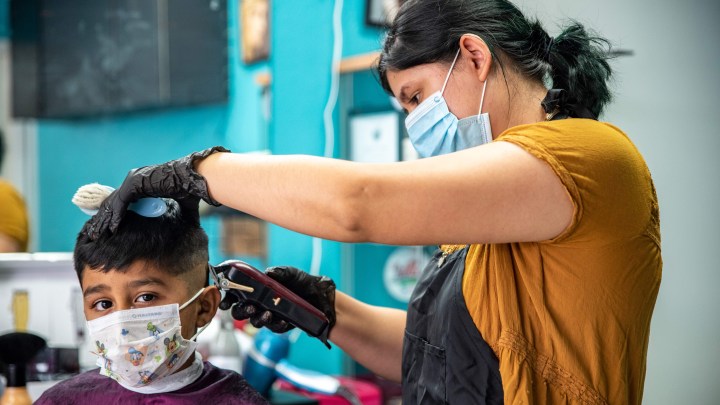 COPY
A boy gets his hair cut at a barbershop in Austin, Texas, on May 8. Sergio Flores/AFP via Getty Images
COVID-19

A boy gets his hair cut at a barbershop in Austin, Texas, on May 8. Sergio Flores/AFP via Getty Images
Listen Now

A big part of Congress’s latest relief package is a new Paycheck Protection Program to help small businesses through the pandemic. Until now, details of how exactly the program will work have been scarce.

This week, the Small Business Administration is unveiling some new guidance on how it’ll determine business owners’ eligibility.

The new Paycheck Protection Program has more restrictions than the first one. It’ll only be available to companies with fewer than 300 employees. The limit last time was 500.

Phil McCollum, a tax partner with the accounting firm Henry+Horne, said many of his clients’ head counts have shifted over the past year, which raises questions.

“Do you have to look at what the number of employees were last December? The fourth quarter of 2019? Or can you just look at what’s happening this quarter,” he said.

But many of the smallest businesses only keep yearly records, said Diane Sumpter, who runs the South Carolina Minority Business Enterprise Center, which is funded by the Commerce Department’s Minority Business Development Agency.

“When I think of barbershops, when I think of hairdressers, I think of salons. They will never have those quarterly things because they don’t keep up with it in that same vein,” she said.

But once guidance on how the rules should be implemented is released, Peter Alden, CEO of the Bay State Savings Bank in Massachusetts, said there’s a chance some customers won’t qualify.

“The last thing you want to do is have a customer assume that they’re eligible, give you all the information, then you got to say, ‘Guess what? You’re not,'” he said.

On the plus side, Alden said the bank’s gone through this already. So this time, the process should be more efficient.