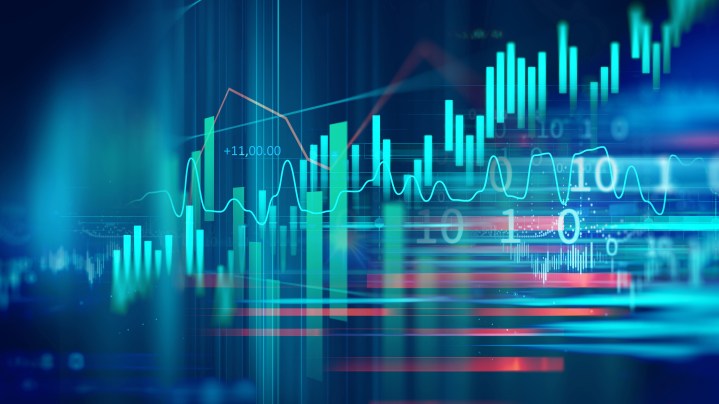 As 2020 comes to a close, we’ve been reviewing a year where COVID-19 has dominated our lives, our businesses and economies around the world.
Until the world is fully vaccinated, we continue to face many challenges — trade tensions, millions of job losses and the steepest recession in generations.

The International Monetary Fund estimates the global economy shrank by 4.4% this year. Compare that to the 2008-09 financial crisis when it contracted by just 0.1%.

On the global edition of the “Marketplace Morning Report,” the BBC’s Leisha Santorelli asked a leading European investor and a business analyst in Asia about what to look out for in the year ahead.

Steen Jakobsen is chief investment officer at Saxo Bank in Copenhagen. He launched the Danish bank’s renowned Outrageous Predictions report and his approach to trading and investing is known to be thought provoking and not afraid to counter consensus. He believes we’re at a “seminal moment in monetary history.”

The People’s Bank of China rolled out an advanced digital currency experiment in October. The Digital Currency Electronic Payment will be a blockchain-based digital version of the yuan. In 2019, 80% of all payments in China were through electronic payment via WeChat Pay and Alipay. The PBOC wants to take this one step further and, in the process, improve the efficacy of monetary and fiscal policy through an increasingly cashless society and with a goal of enhancing financial inclusiveness. The next natural step for China’s digital currency would be as an aid in opening up the country’s capital account, which is currently severely restricted, and makes the yuan essentially unavailable to anyone outside of mainland China. Allowing full access for foreigners into Chinese capital markets will reduce the main barrier of concern for foreign investors for using the yuan in trade and investment: its liquidity and direct access to their investments inside China.

Meanwhile, the stability of the Chinese currency and the built-in traceability and oversight that blockchain tech enables would virtually eliminate the risk of capital flight or illegal transfers out of China. This idea sits well inside China’s dual circulation framework, improving transparency within China, while growing the yuan’s use externally as a compelling alternative to the U.S. dollar in transactions, avoiding the latter’s weaponization by the U.S. As a government-sponsored centralized currency, it will still be viewed as “fiat currency” and won’t have the appeal of decentralized blockchain-based currencies like Bitcoin; but from China’s perspective this is a feature of the digital yuan and not a bug, as it allows negative rates for “cash,” and nominal [gross domestic product] targeting is far easier to achieve as well. Opening up China’s capital account and creating a currency that rivals the U.S. dollar for reserve status will help boost Chinese consumption, fund an entirely new Chinese pension system and deepen the country’s capital market.

If you look at the evolution of energy and energy consumption, we have moved through higher and higher density energy output. We started with burning wood, then we went to coal, to oil, then to atomic power. All of them have high energy intensity. Now the solution for the world is that we’re going to go ahead and do wind and solar, but wind and solar sits just north of wood and before coal.

So it will be the first time in history where the evolution of technology means that we [could end up having to] move to something that is inferior, and more than marginally inferior, in terms of energy output.

So what we were sort of trying to point out for future conversations is that I’m all for green climate transformation. But the problem is that energy through solar and wind is not going to solve the issue. There’s a reason why your iPhone gets bigger and bigger every year. It’s not because it’s smart, it is simply because your energy consumption goes up infinitely more than the batteries can actually produce. So we have a mismatch between the green agenda and all the amount of money that flows into it, and the product which is being delivered. The only way the world can really get to a higher plateau, to a higher level of productivity is to reduce the price of energy.

So what’s going on at the Massachusetts Institute of Technology, among other places right now, is that they are very, very close to being able to establish fusion energy. In 2021, they’ll build the first sort of full-scale reactor that could create fusion energy. And if you get fusion energy, you will get energy delivered at a price which is one-tenth, 100th, even 1000th, of where it is today, and you have an abundance of energy. And with energy prices going down, we’re going to create the biggest-ever productivity and innovation boom in history. We will have enough computer power to do quantum computing … solving Parkinson’s and Alzheimer’s. We will be able to do vertical farming. We will be able to do more desalination of water. So if you really want to focus like we did in 2020 on dealing with the [COVID-19] vaccine, what we need to deal with over the next five years — and I have high hopes — is that we can get closer to fusion energy and then live in a society that is richer and more equal, and where the marginal cost of energy is so low the poorest parts of the world will pick up with the rest.

The good old journalistic rule of having two independent sources to confirm the story is exactly what blockchain is. We have high hopes that the initial sort of attempts by Verizon on the news side and in the case of IBM, its eProvenance that your wine actually come from the wine stock that it claims it comes from. All of this again moves toward a step that we talked about before, that blockchain is really going to be part of our daily lives, and as such, probably will increase quality [of life]. But the story for us here really is that we need to address the fact that the biggest deficit we have in the public domain right now is people cannot tell the difference from truth and lies, and that needs to be addressed for the sake of ourselves but also for the sake of next generations.

Viktor Shvets is managing director and head of Asia Pacific and global strategy at Macquarie Group in Hong Kong. He wrote “The Great Rupture: Three Empires, Four Turning Points, and the Future of Humanity.”

What the pandemic has done is something similar to what happened to the monetary policy. If you think of the Black Monday of 1987, if you think of the global financial crisis of 2008, that really accelerated the role and the importance of monetary policies. What the pandemic in 2020 has done is massively accelerated fiscal policy, and that fiscal response will never go away. It is not that we are going to retreat, it’s not that we’re going to change. In fact, government will become more and more embedded in political, social, economic spheres. Eventually – and that’s not going to be in ’21, it’s going to be a little bit beyond that – monetary and fiscal levers are going to fuse into essentially [modern monetary theory] style policies, the public sector will become responsible for orchestrating and maintaining business and economic cycles, but also for ensuring that societal harmony is to some extent maintained – we’ll go back to the 1950s rather than 1980s, 1990s. And in 1958, the government was much more proactive. So what we have seen in 2020 is that the pandemic has accelerated the process, whereby fiscal rather than just purely monetary levers are going to be used going forward.

Essentially, the way I look at it, second-generation technology companies are gradually dying away. And you have to remember that you are your most profitable and cashflow generative before you die. And so the new companies are nowhere near as profitable, they are nowhere near as large. But they are the next iteration, the third generation of technology, and they are really residing on the frontiers of biotech and infotech. And what 2020 has done is accelerated that growth in many areas from how we get educated, how we get entertained, to the role of games versus social media, but also robotics, automation, replacement of humans, changes in the job functions. We already have about 20% of the population in the West, working in the gig jobs. Rather than having some formal professional titles or progression, 2020 accelerated even more, so the professions will start blurring a lot more into ’21, ’22 compared what would have happened if we did not have the pandemic.

To me, what they have decided in 2020 is the only way to reconcile China’s political social system with prevailing economics. There is just no other way China could develop. But what that implies is not that globalization is completely gone. It’ll just continue atrophying as we go forward. What it does imply that China will be developing and is developing its own sinosphere. More and more transactions will occur within China and within a broader sinosphere a lot, rather than the global area, and the West is building something similar. So the beginnings of the blocs – trading blocs economic, political blocs – really started in 2020. But I think it will accelerate a lot over the next three years.

Brought to you by “Marketplace Morning Report” from the BBC World Service. Transcript has been edited for brevity.