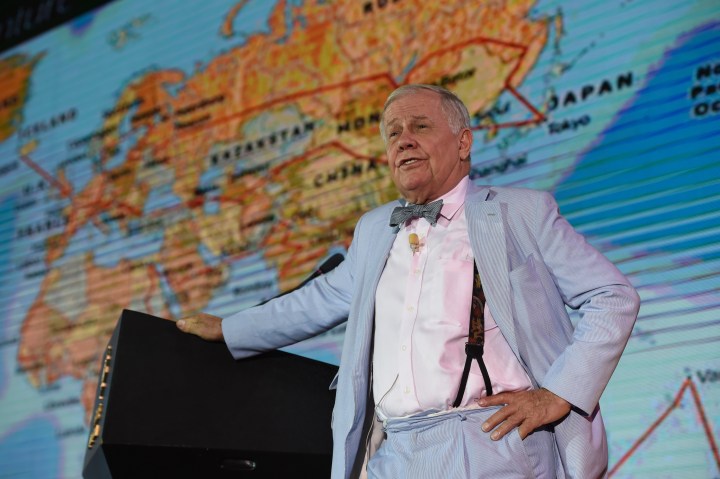 American investor Jim Rogers is perhaps most famous for having retired aged 37 to travel around the world after having made his fortune from the Quantum hedge fund he co-founded with billionaire George Soros. For the last decade or so, he’s been living in Singapore with his family — part of a long-term bet on the future of Asia as the source of global growth and as a result, made sure his two children became fluent in Mandarin and Chinese culture.

In an interview for “Marketplace Morning Report” from the BBC World Service, he issued a note of caution about market conditions but said iron ore, copper, silver and gold remain strong bets as we close out an unpredictable and volatile year.

“I think everything has done badly,” Rogers said. “People couldn’t work, people couldn’t eat, people couldn’t do anything. But as I look around the world, bonds are certainly in a bubble. Stocks in some countries are near highs. Property in many places is [in a bubble]. About the only asset class I see that’s still cheap, are commodities.”

An exception might be gold – a favored safe haven investment – which is heading to its best year since 2010. Spot gold is trading around $1,879.34 an ounce at the time of writing. However Rogers believes a lot of people are being forced to sell gold due to deteriorating economic conditions. “India, for instance, is the largest gold market and there is liquidation going on,” he said. “After this correction is over, and who knows when it will be over, I will buy more gold, I will especially buy silver because silver is down 50% or 60% from its all time high.”

Below is an edited transcript of the interview:

Leisha Chi-Santorelli: This year’s best performing major commodity is iron ore. Could you explain why it’s been doing so?

Jim Rogers: It’s because the Chinese economy is the least badly affected of all economies this year and they buy a lot of iron ore. Whether we like it or not, the Chinese have done a less bad job. Their economy is one of the few – if not the only one – which will show positive growth this year … And of course, the iron ore mines are producing a lot less because of the virus.

Chi-Santorelli: We’re also seeing copper and platinum ticking up on hopes that the vaccine rollout around the world will see economies rebound. Do you think this is a bit optimistic?

Rogers: Copper is also up because electric cars use four or five, maybe six times as much copper as a regular car does. And it looks like there’s a big move coming in electric cars. So that’s part of it. Most people, if you look out the window, expect the world economy to be better in 2021. But that’s mainly because 2020 was such a disaster during part of the year.

Chi-Santorelli: Following President Trump signing off on the pandemic relief bill and the House vote to increase the stimulus checks we’re seeing global stocks head for a fresh record in these final days of 2020. But you said that you think that stocks may be in a bubble? Could you elaborate?

Rogers: This is not a full fledged bubble yet. But if you look at some, you know, electronic or technology stocks that go up all over the world like Samsung, Tencent and others, they’re going up and a bubble is developing. You having a whole new crowd of investors come into the market who don’t know all the signs are there. It’s not a full fledged bubble yet, but I can see signs of a bubble developing. I’ve seen this movie before.

Chi-Santorelli: So when you say that a bubble is developing, combined with the trillions of dollars central banks and governments are pumping into the global economy at the moment, should we be worried?

Rogers: Well, I’m not sure about anything. I think I see what’s going on. I think I see the bubble developing, the bubble will become bigger and bigger, probably during 2021. But later in the year, the bubbles probably going to pop and a lot of people are going to suffer. I don’t see any reason to be worried right now. Mr. Biden, and his crowd all wants to spend money and they will.

Chi-Santorelli: And so if you were to give your top three predictions for the markets going into 2021?

Rogers: I think the market is going to go up for a while because Mr. Biden and his crowd love to print money, love to borrow money, love to spend money. So markets around the world will probably go up. Markets in Asia like Japan, China will go up more because they’re down more. Bonds will stop going up.