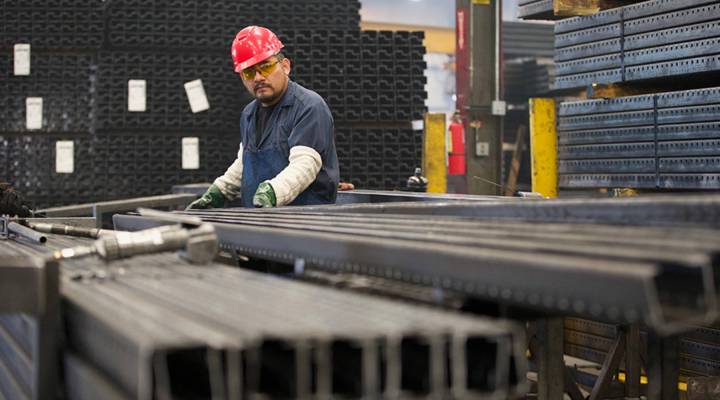 This week, the United States and South Korea, the third-largest steel exporter to the U.S., formally announced a trade agreement. The deal cuts South Korea’s average annual steel exports to the U.S. by 30 percent and exempts that country from the 25 percent steel tariff announced by the Trump administration earlier this month.

Hannibal Industries, the largest manufacturer of steel pallet racks in the western United States, buys a lot of its steel from other countries. It makes steel racks and tubes used for shelving units in warehouses. Marketplace host Kai Ryssdal traveled about 6 miles south of Marketplace headquarters in downtown Los Angeles to visit its facility. He talked with Steve Rogers, Hannibal’s executive vice president. The following is an edited transcript of their conversation.

Steve Rogers: Business has been very good as an industry over the last three years. Good growth, good demand.

Ryssdal: Here comes now trade in the news, tariffs on your particular industry.

Rogers: Listen, any business likes stability, right? You like to have some kind of forward look as to what your supply is going to be and some idea of what it’s going to cost. Now being in the steel industry now for 30 years, we’re used to volatility. If you look at the price of steel on the CRU —

Ryssdal: Does it feel different or is it actually different? I mean, these tariffs only been in the news like a month.

Rogers: Been in the news a month, been percolating for about a year. You know, those of us in the industry have kind of been waiting and waiting and waiting and waiting. And last month, it came to a crescendo. But there is still so much — it’s so fluid, and it looks like South Korea is going to continue to supply steel to the United States at about 70 percent of their average between 2015 and 2017.

Ryssdal: And that’s good news for you.

Ryssdal: When you say hot roll mill, you mean the big, scary-looking furnaces?

Rogers: Correct, correct. So, that’s our raw material, right? Flat roll steel. We only have one mill on the West Coast so —

Ryssdal: So you need foreign imports?

Hannibal Industries is already seeing up to a 35 percent increase in the price of its raw materials.

Ryssdal: Explain that a little bit, because the Trump administration’s line has been we’re going to increase domestic production. You see plants coming online and 500 people being hired in steel mills back East. Is that going to do it for you?

Rogers: You know, I try to stay out of the politics of it. What I’m interested in is having a stable steel supply, especially to the West Coast, because we’re primarily centric to the West Coast.

Ryssdal: Let me ask the same question in a different way. Can the domestic steel industry supply what you need?

Rogers: Supply what we need or supply on a macro —

Ryssdal: Well, domestic demand, of which you are a part.

Ryssdal: Are you already seeing increases in the price of your raw materials?

Ryssdal: Yeah. And you’re passing those costs on?

Rogers: We’re trying to. But at some point, there’s a threshold.

Rogers: So let’s say you’re going to expand your warehouse.

Rogers: Your business is good. And so you’ve got a plan, and you’ve got an ROI on the equipment to do that. And part of that is our product, right? So let’s say it’s a million dollars. And that gets signed off and the ROI looks good. And the expansion plan goes on and now it’s a million and a half.

Rogers: Well, that at some point changes the calculus, and people either believe “This is temporary, so I’m going to put it on hold” or, you know, “If that’s going to be the cost, then we’re not ready to do it.”

Ryssdal: Are your customers coming to you and saying, “Hey, Steve, man, I can’t make this right now. I can’t do it.”

Ryssdal: You expecting that?

Rogers: I don’t know what to expect, because I really don’t know how it’s going to shake out. Again, it’s so fluid, Kai. It’s so fluid. I mean, what we learned today gave our company a little comfort in that our supply may not be pinched as hard as it has been for the last two months. So, I mean, two months ago there was no foreign offering for steel, at least to the West Coast. There was too much uncertainty, and you’re talking about a 25 percent tariff.

Ryssdal: So foreign steelmakers preemptively said we’re going to hold off on the U.S. for a while?

Rogers: We’re going to hold off. Exactly. So that’s put a pinch on the supply, like I said, especially on the West Coast, because to ramp up steel production the United States takes time. And so the domestic mills are taking care of their customer base. First the contractual customers, right? And then people like us who buy on the spot market, there was allocation happening. And domestic mills would say, “We’re only going to allow you to buy x number of tons a month.”

Ryssdal: Wow. I appreciate you not wanting to get into the politics of this.

Ryssdal: Yes, but wait for the question. A lot has been made of the desire to protect American steel jobs with these tariffs. What’s not talked about so much by the administration are the many, many, many, many more jobs in this economy that depend downstream —

Ryssdal: And it seems to me you are at that fulcrum where the steel jobs translate into those jobs downstream.

Rogers: Correct. That’s right. Downstream manufacturers potentially could get squeezed with higher input costs while still having to compete with foreign finished goods.