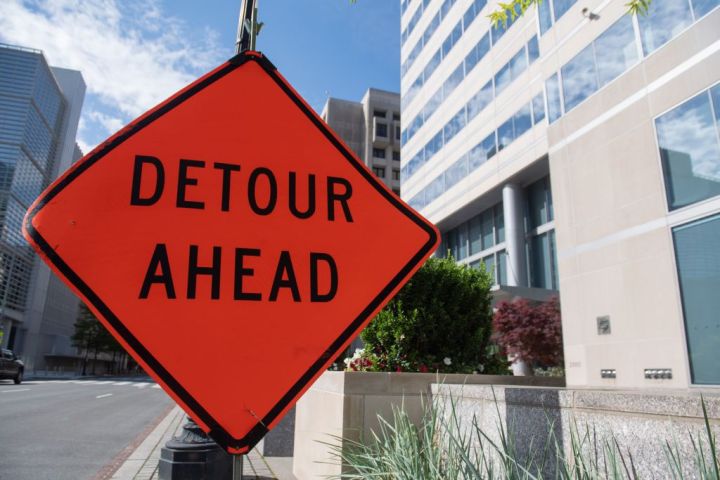 COPY
A "Detour" sign outside the offices of the International Monetary Fund in Washington, D.C. The economic downturn in the United States is likely to hurt the global economy, says economist Susan M. Collins of the University of Michigan. Saul Loeb/AFP via Getty Images

A "Detour" sign outside the offices of the International Monetary Fund in Washington, D.C. The economic downturn in the United States is likely to hurt the global economy, says economist Susan M. Collins of the University of Michigan. Saul Loeb/AFP via Getty Images
Listen Now

The U.S. economy contributes more than half of the world’s stock market capitalization, accounts for over 15% of global GDP and is a pretty crucial import market to boot. It’s no wonder, then, that economic crises in the U.S. spill over into the global economy.

Marketplace host Kai Ryssdal spoke with University of Michigan provost and international economist Susan M. Collins about how the health crisis in the U.S. could translate into a global economic crisis. The following is an edited transcript of their conversation.

Kai Ryssdal: Without overstating the case for the American economy,  how bad is it for the global economy that this virus is doing damage to the United States and its economy?

Susan M. Collins: Well, I would say that it is quite problematic. At the same time, it’s difficult to put any precise numbers around that. There is the old adage that when the U.S. sneezes, the global economy has a cold, and I would add that some countries get pneumonia. So the impact is certainly widely differentiated for a variety of different reasons.

Ryssdal: So if I’m Angela Merkel in Germany, or Prime Minister Abe in Japan or in a developing economy, how worried ought I be about what’s going on here?

Collins: Well, I think you should be quite worried. At the same time, you should be worried for many reasons. But it’s also true that the U.S. economy is not as large a share of the global economy as it was some decades ago, and it’s not the only engine of global growth. At the same time, this pandemic, of course, has impacted all countries all over the world. And so all of them are reeling, which means it’s not obvious that there is another engine of growth that’s going to come in and take over.

Ryssdal: Are you looking to China as perhaps that engine? They seem to be, you know, they got in the recession faster, and they seem to be out faster, while we are still struggling.

Collins: Well, you know, if you think back to a year or two or so ago, U.S. economy was slowing. And China and other emerging markets, in particular, and Asia were where we were looking to for engines of growth. You know, at the same time, the forecast for China has fallen dramatically. It’s still positive, the [International Monetary Fund] has it at 1% for the year ahead. But that’s dramatically down from where they had it some months ago.

Ryssdal: Let me take you sideways for a second with the observation that you’re a trained economist, not a professor of political risk analysis, but it does seem to remain: What do you make of the heightened tensions in the U.S.-Chinese relationship? Certainly trade started it. But now we have the consulate in Houston and lots of barbed words on both sides.

Collins: Well, I think it’s all part of the mix. They all reinforce each other. And to see those tensions escalate as we’re in the midst of these other challenges is reinforcing. So you know, we have the trade channels, we have the channels through financial markets, and then also through commodity markets. And then in addition, the geopolitical tensions, it’s all reinforcing, because investor sentiments are a major part of what the kind of forecast uncertainties are connected to.

Ryssdal: Right. So that goes to mood., and last question and then I’ll let you go: investor sentiment, you mentioned, the consumer mood is extremely uncertain and anxious. As you look globally, everybody pretty much shares that. Is there a neat and tidy way out of this thing? Or do we just have to ride it out and wait for this virus to make up its mind?

Collins: I don’t think there are any silver bullets here. This is a very different recession than ones that we’re used to. I think the the kinds of interventions that the Fed has been doing are helpful and the rest of the world also looks to us monetary policy. I think the promising signs in terms of an additional fiscal package are helpful as well. But you know, there are lots of twists and turns that are going to happen before this one gets resolved. And that takes me back to the various uncertainties and the fact that there are so many channels that are interwoven here.