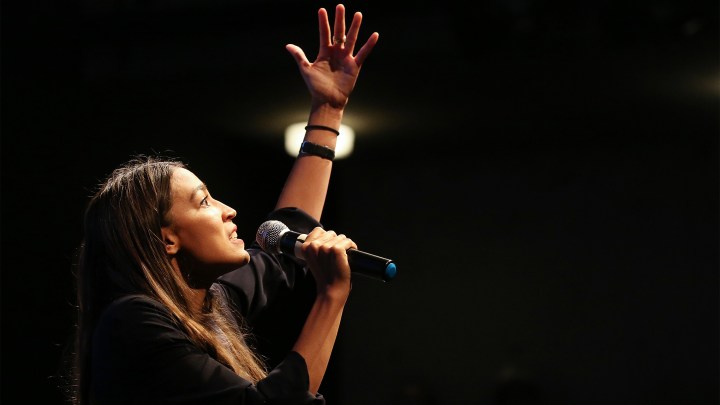 Alexandria Ocasio-Cortez, the newly elected representative from the Bronx, told Business Insider recently that modern monetary theory, or MMT, should “be a larger part of our conversation” when it comes to funding ambitious policies she’s proposed, such as her “Green New Deal.”

MMT is an economic theory that’s been swirling around U.S. economic policy debate for some time, but we took Cortez’s comments as an opportunity to give a deeper explanation of MMT.

Stephanie Kelton is almost universally acknowledged as the person to talk to about MMT. She’s a former economic adviser to Democrats on the Senate Budget Committee and the Bernie Sanders 2016 presidential campaign.

She told Marketplace’s Kai Ryssdal that MMT is a way of understanding how a modern economy works.

“If you control your own currency and you have bills that are coming due, it means you can always afford to pay the bills on time,” Kelton said. “You can never go broke, you can never be forced into bankruptcy. You’re nothing like a household.”

Because the government controls how many dollars are out in the economy, Kelton and MMT said Congress and the president shouldn’t worry about balancing the money coming in through taxes with the money going out to fund government programs.

For those of you screaming “Inflation! Inflation! Inflaaation!” at the idea of the government creating fresh money every time it needs to pay the bills, calm down. The MMT economists know about Weimar, Germany, too. If Congress stops worrying about balancing the budget, Kelton said the government could spend too much money into the economy with ambitious programs and end up causing inflation.

That’s where tax policy comes in. Kelton said taxes can act as a “release valve” for inflation.

To wrap your brain around this concept, picture a bathroom sink. Think of the government and its ability to create more money whenever it needs to as the faucet and that bucket area of the sink where the water goes as the economy.

The government controls how much money, or water, is flowing into the economy. It spends money into the economy by building interstates or paying farm subsidies or funding programs.

“And so as those dollars reach the economy, they begin to fill up that bucket, and what you want to do is be very mindful about how full that bucket is getting or you’re going to get an inflation problem,” Kelton said.

Inflation is where the sink overflows. If that happens, Kelton said there are two ways to fix it: “You can slow the flow of dollars coming into that bucket. That means the government then has to start slowing it’s rate of spending, or you can open up the drain and let some of those dollars out of the economy. And that’s what we do when we collect taxes.”

Let’s back up for a second and think how this stuff works. Chairman Jay Powell and the gang at the Federal Reserve are the people thinking about the economy’s big picture and keeping that water level right.

The Fed uses monetary policy — interest rates — to keep that sink we were talking about from getting too empty or too full. The MMT folks want Congress to be doing that using fiscal policy — government spending and taxing decisions.

Randall Wray, a senior scholar at the Levy Economics Institute at Bard College and one of the developers of MMT, said he thinks the Fed should stop focusing on inflation.

“If you ask what I think ideal monetary policy would be, what the Fed really should do is stabilize interest rates at a low level,” he said.

The catch, of course, with telling the Fed to just keep interest rates low and controlling inflation with fiscal policy is the political reality in Washington.

“The making of fiscal policy, it’s never neat and tidy. It’s not efficient,” said Sarah Binder, senior fellow at the Brookings Institution and a political science professor at George Washington University. “The political constraints on members makes it harder to use fiscal policy and to use tax policy,” she said.

Running the federal government the way the MMT economists would if they were in charge would require Democrats and Republicans to change the way they think about fiscal policy and monetary policy.

Ryssdal asked Kelton if, given the political atmosphere in Washington, she thinks that’s likely to happen anytime soon.

“Well, that’s tough,” she said. “Democrats and Republicans don’t seem to want to pass legislation of any kind .. and if we can’t do that, I guess I’m not that hopeful in the current climate that we’re going to do much more.”