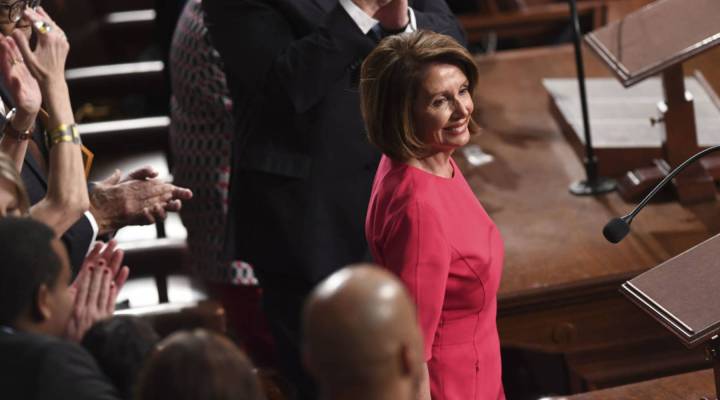 Incoming Speaker of the House Nancy Pelosi reacts to applause during the 116th Congress and swearing-in ceremony on the floor of the House of Representatives on Thursday in Washington, D.C. SAUL LOEB/AFP/Getty Images
Government shutdown 2019

Incoming Speaker of the House Nancy Pelosi reacts to applause during the 116th Congress and swearing-in ceremony on the floor of the House of Representatives on Thursday in Washington, D.C. SAUL LOEB/AFP/Getty Images

As Democrats take over the House of Representatives on Thursday, their priorities include ending the government shutdown, passing rules that address the country’s deficit and reforming the electoral process.

Rep. Nancy Pelosi, D-Calif., who was elected speaker of the House Thursday, will assume power for the first time since 2011. The last time Democrats took over a Republican-controlled House, Pelosi released an ambitious 100-hour agenda that included increasing the federal minimum wage from $5.15 to $7.25 an hour, expanding stem cell research and lowering prescription drug costs.

This detailed plan was influenced by the “first 100 days” of Franklin Delano Roosevelt’s presidency — a term he coined — in which he pushed 15 major laws through Congress. Setting this timetable allowed Democrats to say, “We’re going to have significant change, and we’re going to do it even faster,” according to Andrew Smith, director of the University of New Hampshire Survey Center.

Before they took control of the House, members of the Democratic party had mentioned wanting to push the federal minimum wage from $7.25 an hour to $15 and put constraints on Big Pharma in the first 100 hours, although it remains to be seen whether the party still plans to pursue those actions in that time frame.

“To maybe modify and reduce expectations, it’s a smart political thing to do,” Smith said.

But here is what we know Democrats are pursuing within this timetable:

Democrats are voting on their bills Thursday that would fund government agencies and bring hundreds of thousands of federal workers back to work. The partial government shutdown began on Dec. 22 after Democrats and President Donald Trump were unable to reach a compromise over his demands for a $5 billion border wall.

One bill would temporarily fund the Department of Homeland Security at current levels, with $1.3 billion for border security, through Feb. 8.

“Nothing for the wall. We’re talking about border security,” Pelosi said in an interview with the “Today” show. “There is no amount of persuasion he can do to say to us, ‘We want you to do something that is not effective that costs billions of dollars.’ That sends the wrong message about who we are as a country.”

Another component of the Democratic package includes six other bipartisan bills, some already passed by the Senate, that would fund the departments of Agriculture and Housing, along with others closed by the shutdown.

Some House Democrats have released a rules package that would create a climate change committee and, controversially, a “pay as you go” rule.

Also known as PAYGO, the House rule would require that any increase in entitlement spending would have to be offset by equal cuts or revenue increases. Some House Democrats are pushing for this to counter the deficit, which is predicted to reach $1 trillion this year under Republican leadership.

However, Democratic House reps like Ro Khanna from California, Tim Ryan from Ohio and Alexandria Ocasio-Cortez from New York have spoken out against it. Ocasio-Cortez tweeted that she plans to vote no on the rules and that PAYGO is “a dark political maneuver designed to hamstring progress on healthcare+other leg.”

Tomorrow I will also vote No on the rules package, which is trying to slip in #PAYGO.

We shouldn’t hinder ourselves from the start. https://t.co/WW3UaBs7vh

Opponents will need 18 votes to turn down the package.

The Democratic Party plans to introduce a bill called “For the People Act” Friday.

It aims to reform campaign finance, requiring super PACs and “dark money” political organizations to make their donors public, and it will create new automatic voter registration that will ask voters to opt out, rather than opt in.

The bill will also reportedly require presidential nominees to disclose 10 years’ worth of tax returns shortly after they become a nominee. However, the bill isn’t likely to be signed into law.

“The Democrats are going to pass a lot of things through the House that they know aren’t going to make it through the Senate,” said the University of New Hampshire’s Smith. “But symbolically, it’s very helpful for them to keep their supporters engaged.” 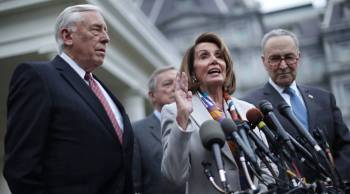 As new Congress meets, job one is opening the government