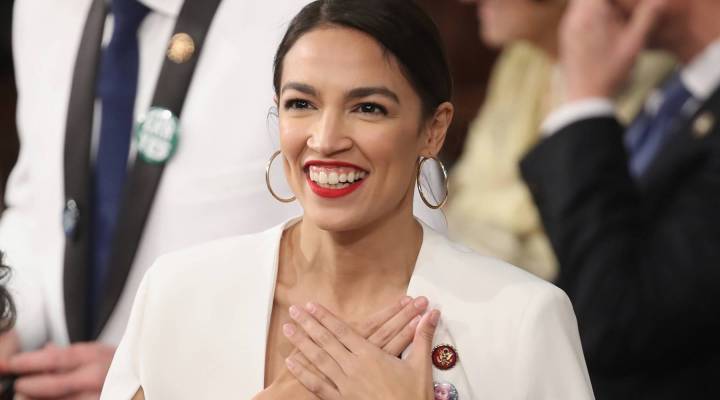 Alexandria Ocasio-Cortez has given tips on how to reform America’s tax system, tackle climate change and improve your skincare routine.

The newly elected representative from the Bronx easily shifts between talking about major social issues and the fashion and beauty choices that she makes, showing that the two topics aren’t mutually exclusive.

In fact, she often uses her attire as a way to make a greater point about social issues. At her swearing-in ceremony earlier this year, she wore bold red lipstick and gold hoops — a signature combo of hers.

“Lip+hoops were inspired by Sonia Sotomayor, who was advised to wear neutral-colored nail polish to her confirmation hearings to avoid scrutiny. She kept her red,” Ocasio-Cortez tweeted. “Next time someone tells Bronx girls to take off their hoops, they can just say they’re dressing like a Congresswoman.”

In the weeks since, Ocasio-Cortez herself has inspired dozens of women, especially Latina women, to wear gold hoops and red lipstick at their workplaces.

“She’s out there being a professional and wearing whatever the heck she wants, and it gives you a little confidence to say, ‘Yeah, I can do that,’ said Jeni De La O, an Afro-Latina woman who’s an accreditation and reporting assistant at Oakland University in Michigan.

Carlota Holder, a Latina woman who works as an English-language learner coordinator at Enlace Academy in Indiana, recently wore the combo as an homage to Ocasio-Cortez for her school’s career fair.

For Holder, red lipstick has been a staple throughout her life. She remembers watching her mom and aunts putting on bright lipstick when she was growing up.

“I think for us, it’s like a norm. We just see it. I think that starts when we’re really young. My mom had all different kinds of red lipsticks. She still does,” Holder said. “It was like a bonding experience with my mother.”

Whether or not you agree with her political beliefs, Ocasio-Cortez’s style has opened up a conversation about the dress code norms women have encountered throughout their careers — and the criticism they’ve faced from colleagues for challenging those norms.

Too shiny, too flashy, too distracting — these are the concerns women have internalized about what people might think if they wore bold colors and bright jewelry on the job. Women exist in a contradictory space: at the same time that society pressures them to wear makeup, wearing the “wrong” kind can also draw intense scrutiny.

It can depend on the workplace. Some jobs, like those in creative fields, have adopted freer attitudes toward someone’s choice of attire. But historically, corporate America has been very formal and very reserved, according to Di Ann Sanchez, founder and president of the firm DAS HR Consulting.

“So if women wanted to move up in an organization, they modified their style,” she said.

Victoria L. Brown, a neuropharmacologist in Texas who has also been inspired by Ocasio-Cortez to wear gold hoops and red lipstick, said she’s felt pressure to wear neutral colors in order to succeed professionally.

“I’m an African-American female, and I’m in my 50s. I grew up in a time where I was literally scripted on how I should dress and what I should wear,” Brown said. “It was really about muting yourself and muting your personality and relaxing your hair.”

For Latina women specifically, red lipstick and gold hoops may evoke certain stereotypes, which is why some say they’ve been reluctant to wear this combo.

De La O said although she’s never faced stereotyping at her current job, she has at other institutions of higher education.

As women of color from working class origins enter middle-class occupations, they may face repercussions and sanctions for how they express their identity, according to Glenda Flores, an associate professor of Chicano/Latino studies at the University of California, Irvine.

In some fields, like law, Chicana women describe wardrobes that consist of “conservative high heels,” pantsuits or skirts in “blue, red and black,” “natural make-up” and “pearl or small gold earrings,” according to the paper “They Are Testing You All the Time” by Gladys García-López and Denise A . Segura.

And depending on their clients and the setting, they “mold their bodies to eradicate, minimize, or incorporate aspects of the colorful dress, hairstyles, and jewelry (for example, large silver or gold hoops) often associated with Chicano/Mexican cultural displays.”

Attitudes are starting to change, but slowly.

Deborah Rhode, a professor and the director of the Program in Law and Social Entrepreneurship at Stanford University, said that norms have changed drastically in the past couple of decades, and there’s much more flexibility for women to wear what they want without it being construed as unprofessional.

“But that said, there’s still a tremendous amount of bias that’s directed against women for either appearing too concerned or not concerned enough with their appearance,” she noted.

Di Ann Sanchez said some workplaces, like engineering companies, are starting to become more lax about their dress codes, especially in an effort to appeal to younger employees.

“If companies don’t modify their conservative, corporate dress culture … they’re not going to be able to attract or retain this millennial group,” Sanchez said. “I think it’s going to be a real shift with organizations.”

Victoria L. Brown said she wants bright lipstick to become a part of her wardrobe, while Jeni De La O said she’s reevaluated some of the initial hesitation she’s had about red lipstick and gold hoops since she first entered the workforce.

“What I have taken from this for myself is that I’m going to move forward in a fearless way and do things that make me happy,” De La O said. “And rather than shrinking back from the possible application of a stereotype to me and my work, I would rather confront that and just move forward for myself.”