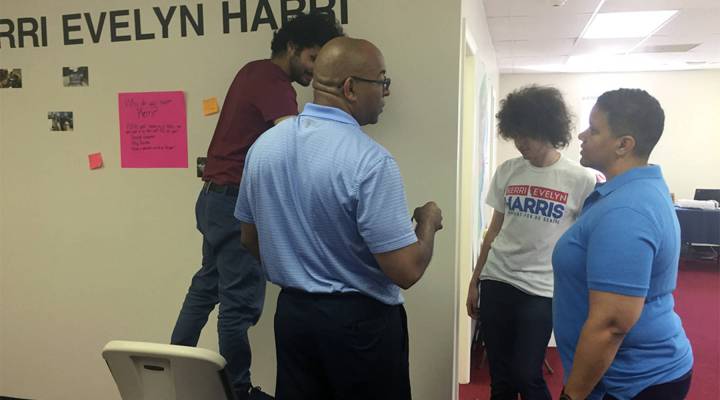 Many first time candidates run their primary campaigns with a skeleton crew, a core group of dedicated supporters to help them knock on doors and promote their message. If they make it through the primary, candidates then have to switch gears, quickly scaling up to build a network ready to compete in the general election.

For first time candidate Kerri Evelyn Harris, that means she has to quickly build her staff ahead of the primary. She’s running in the Democratic primary against three-term incumbent and former Delaware Governor Tom Carper. He’s raised more than $3 million this campaign cycle, and Harris has brought in just under $47,000.

Though Harris’ has recruited more than 500 volunteers since kicking off her campaign in January, she also relies on support from outside progressive groups, such as the Working Families Party or the Justice Democrats.

“So for instance,” said Harris in a July interview, “Justice Democrats, when they first endorsed they couldn’t give anything [financially] really. It was just their endorsement. But they also had a membership base of like 250,000. So that’s exposure.”

That exposure can help with fundraising, and the groups can also loan experienced staffers who help with outreach, logistics, and media. It’s a similar service you might see from the major parties, lending technology, staffing, and financial support to their chosen candidates, but on a smaller scale. It’s a model that has boosted other first-time candidates, including Democrat Alexandria Ocasio-Cortez in her New York Congressional primary. In fact, some of the same ground staff who helped propel Ocasio-Cortez to her surprise victory are now on the ground for Harris in Delaware.