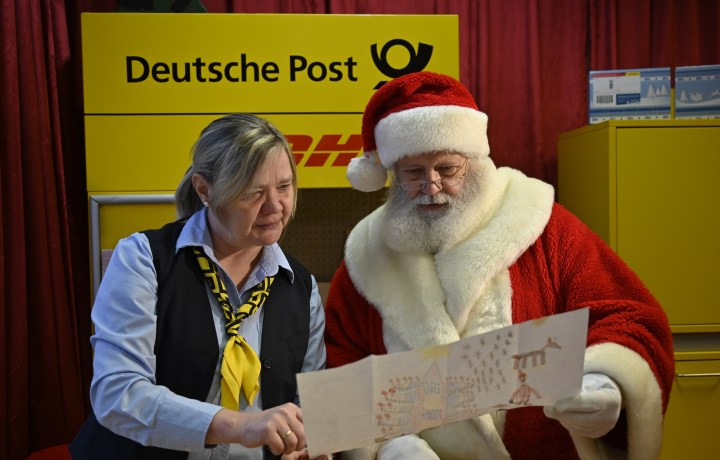 COPY
Package-delivery companies like DHL Express are under even more pressure this holiday season to not only get gifts where they need to go but also vaccines to people around the world. (Photo by Tobias SCHWARZ / AFP) (Photo credit should read TOBIAS SCHWARZ/AFP via Getty Images)
Fast-Track Vaccines

Package-delivery companies like DHL Express are under even more pressure this holiday season to not only get gifts where they need to go but also vaccines to people around the world. (Photo by Tobias SCHWARZ / AFP) (Photo credit should read TOBIAS SCHWARZ/AFP via Getty Images)
Listen Now

First comes regulatory approval of a vaccine. Then comes the next big logistical hurdle: getting doses to people.

Even in normal times, that’s a challenge. The first rollout of the Pfizer-BioNTech vaccine in the U.K. is coming at the busiest time of year for package delivery companies. Not only are they tasked with getting doses to the world, but also delivering a greater-than-usual number of holiday gifts on time.

On the global edition of the “Marketplace Morning Report,” DHL Express CEO John Pearson told the BBC’s Victoria Craig how his company is preparing.

John Pearson: From an aviation capacities point of view, it’s quite manageable, it’s manpower and resources. The real crunch comes if you haven’t got the aviation lift ready. So we’ve been adding to our fleet since May, we’ve been scouring the market for economically priced aviation assets. And that was because the PPE boom started in May. We’ve done that pretty effectively. We only had a few backlogs in April, and since then we’ve been managing well. And then when the vaccines come, everyone and his dog is going to be busy. All we could do was put ourselves in the best possible position and give e-commerce and other customers a good peak and to be able to fulfil responsibilities on the vaccine front.

E-commerce: deliveries of the future

Victoria Craig: It does seem you will be very busy this holiday season. You’re expecting volumes to be more than 50% higher than they were last year. So are the ways in which you deliver holiday gifts and vaccines similar? In other words, do you need different kinds of planes or more employees to cover more routes?

Pearson: So the 50% was e-commerce volumes, and we expect to be pretty close to that. But no, the delivery process is the same whether it’s a part for an oil rig, a box of vaccines or an e-commerce gift for someone’s friend. They run through exactly the same aviation network, they run through the same origin service center, through a gateway, and then knock on the door of the e-commerce customer in queue, Richmond or anywhere else. The thing that I would say is that the methodology of moving a vaccine involves things that make sure that the temperature remains at what it should remain. In the case of Pfizer, obviously, [that’s] extremely cold. In the case of some others, may be less so. So there’s a little bit of operational complexity. But by and large, something will come out of the manufacturing site of Pfizer, or Moderna, or AstraZeneca and we will move it from there to whoever it is consigned to.

Craig: I’m sure people have started sending out their holiday packages, but have you also begun shipping vaccines yet?

Pearson: We’ve done some test shipments for some providers, but we haven’t yet been given the first call to move live vaccines.

Craig: Distributing a coronavirus vaccine isn’t just a one-and-done kind of thing, this effort could go on for a couple of years. So, given that, and the experience you had with the PPE deliveries earlier in the year, how has your business fundamentally changed in the last six to nine months?

Pearson: I think you have to look at it as just one slice of what we move. E-commerce is here to stay. But it’s close to 45% of all our shipments at the minute. Whilst we expect vaccines to be around for a while, there will be an ongoing flow, it’s not one-and-done in the sense that it will be out in the space of two months, because it’s a much longer program than that, as you say. But it is, nevertheless, just one portion of what we do.

Craig: You have new research out today that takes stock of the current environment and finds that while COVID-19 has disrupted how we do business, it hasn’t permanently disconnected businesses from each other. What are some of the biggest lessons you’ve learned in crisis-proofing your business which has become so crucial to the global distribution chain?