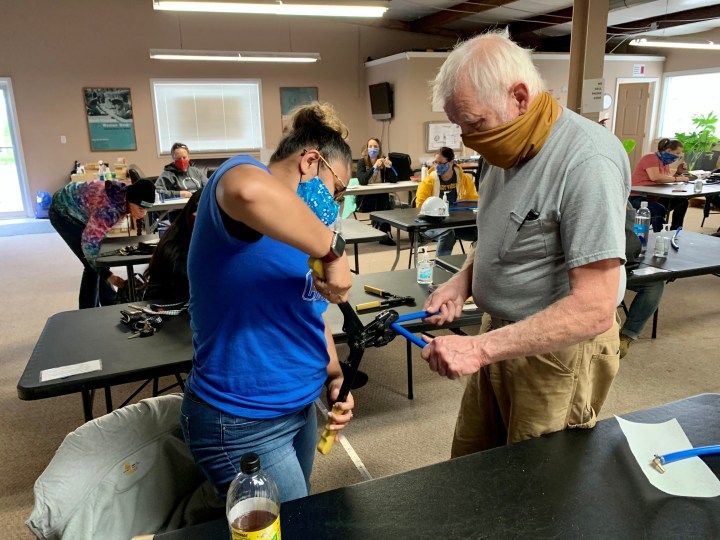 COPY
Instructor Larry Hayes shows a Step Up for Women student how to attach plastic tubing to a pipe fitting. Amy Scott/Marketplace

Instructor Larry Hayes shows a Step Up for Women student how to attach plastic tubing to a pipe fitting. Amy Scott/Marketplace
Listen Now

Inside a yellow industrial building behind a Family Dollar store in Morgantown, West Virginia, 13 women were getting a lesson in the basics of plumbing. They all wore masks, sitting at their own tables, and everyone had two sections of plastic tubing — one for hot water, one for cold — to attach to a brass fitting.

“We’re going to start with the clinch clamp, which is this tool here,” said instructor Larry Hayes.

Hayes is 73 and has worked in construction most of his life. He passed around what looked like a giant pair of pliers, with long, yellow handles. One of the students struggled to squeeze the handles together to tighten the clamp, as her classmates cheered her on.

Diana stood, gave it one final press, and the clamp closed around the fitting.

“There you go,” Hayes said. “You use this every day all day long, you get pretty tough.”

This is Step Up for Women, a 12-week construction training program run by the nonprofit West Virginia Women Work. For 20 years the organization has been helping women gain financial independence by learning skilled trades in construction and manufacturing.

Angelica Brennen, 23, said encouragement is part of the deal.

“When I get on a job site and someone doesn’t clap for something I do, I’m going to get pretty mad,” she said.

Brennen moved to this small city on the Monongahela River from Pittsburgh to be with her fiancé, a coal miner, right as the pandemic arrived. The job she’d lined up at an optical shop fell through.

“I’d say I was not in the best place,” she said. “I just like felt kind of like, I don’t know what I want to do with my life. I don’t have any direction.”

Many of the women who come through the program have just a high school education and have been working in low-paying service jobs or rely on public assistance. Brennen finished high school in 2015 with a cosmetology license. She worked in salons as well as her mother’s cleaning business but wanted a change. She saw an ad for Step Up for Women and took a chance.

First up was carpentry. They started building a few benches, then a picnic table and finally a 10-by-12-foot shed. Next came electrical wiring, and now plumbing.

“Everything has been extremely interesting to me, so I’m not exactly sure what direction I want to go in now. But for the first time in a really long time, I’m excited for my future,” Brennen said.

Step Up partners with local community colleges and unions so that students graduate with industry-recognized credentials that can lead to entry-level jobs. Despite the pandemic, the construction industry is still facing a shortage of skilled workers. And while women have made gains, now making up about 10% of construction jobs overall, they still only hold about 3% of jobs in the skilled trades, according to the National Association of Home Builders. Carpenters, electricians, bricklayers and plumbers are still overwhelmingly men.

Sadie Basem, who’s 29, finished the program three years ago and walked right into an apprenticeship with the ironworkers union. She’s now a journeyman making more than $30 an hour, almost three times what she earned working in a hospital kitchen before.

“I just bought a house this year,” she said, laughing, almost in disbelief. “I am financially stable.”

The work isn’t easy. On a recent job, she hauled 75 pounds of rebar on her shoulder and crouched over a welding torch for hours. She’s almost always the only woman on a job site.

“It would be nice to have a woman’s bathroom,” Basem said. “We’re supposed to, but I never asked for it, just things like that. I’m the only woman, so I’m not going to ask for one bathroom just for me.”

The program doesn’t sugarcoat the realities of working in the male-dominated construction industry. The women are required to work out to build their strength for the heavy lifting and long days on their feet. They get training on preventing and reporting sexual harassment.

West Virginia Women Work also provides formal training for contractors and construction companies aimed at changing the culture at job sites, said development manager Carmen Bowes. But she added that a lot of the work of fitting in still comes down to the women.

“Sometimes men will be hypercareful, and so the job site becomes really stiff and uncomfortable in that way,” she said. “You never want to tell women that they need to make the room feel better, because women are already told that so often, but it can’t hurt to have the skills there if you need them.”

Plumbing instructor Larry Hayes said teaching women has been an education for him, too. When he started out, he said, there was a clear line between men’s and women’s work.

“That’s definitely changed. My thinking on it’s changed. This program has helped my thinking.”

After a break, the women got back to work, building a temporary floor and wall in the middle of the classroom.

Jody Rorbaugh held a brace while a classmate attached it with a screw gun. Rorbaugh is 52, and after 20 years in retail was making just $12.50 an hour as an assistant manager. Then her marriage ended, and she was on her own.

“I was basically unskilled, and the older you get, the harder it is to find a job,” she said. In Step Up, she was getting called back for interviews, even before she finished the program. “I feel like I’m armed with some good skills and certifications,” she said. “It’s going to be life-changing for me.”

By the end of the afternoon, they’d roughed in the plumbing for a kitchen and bath and stood admiring their work.

“Look at us, plumbers,” one woman said, as the others laughed.

Some of them may be. There’s really only one requirement to qualify for the program: You have to actually want a job. And based on the track record, around 85 percent of the women will get one.

This story was produced as part of the Higher Education Media Fellowship. The Fellowship supports new reporting into issues related to postsecondary career and technical education. It is administered by the Institute for Citizens & Scholars and funded by the ECMC Foundation.