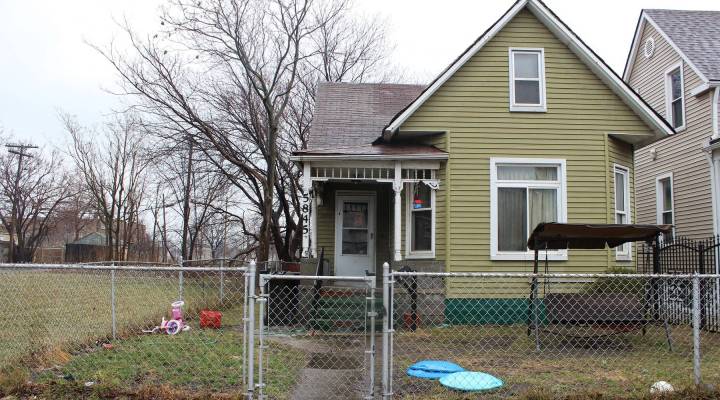 Maria Walkenbach lives in Detroit with her four dogs, just around the corner from the construction site for the Gordie Howe International Bridge, being built across the Detroit River to Canada. Walkenbach’s been here, in the home she inherited from her mother-in-law, for almost 20 years.

“My husband actually passed away in this home. So, there’s a lot of memories in this home. And now that I’m looking to retire in another year or two, I want to start fresh,” Walkenbach said.

That’s why she signed up to participate in the first round of the city’s Home Swap program. After logging into the Bridging Neighborhoods website she scrolled down though photos of 10 homes the city of Detroit acquired after the previous owners stopped paying taxes. The city is responsible for 30,000 such structures in a land bank that was created in the midst of the Great Recession. Detroit, after all, was one of the nation’s hardest hit cities.

The land bank properties available for the Home Swap program are abandoned and mostly dilapidated. But the city will do renovations of up to $75,000 in exchange for eligible homes. Walkenbach, who is eligible for the program due to her proximity to the bridge construction site, has her eye on a little brick three bedroom house a few miles away.

“I love it because it has a humongous backyard with two trees my grand boys can climb,” Walkenbach said.

The Home Swap program came out of a community benefits agreement that people living near the bridge site lobbied for.

Charity Dean, director of the Bridging Neighborhoods program that oversees Home Swap, said renovation costs are being paid for by the sale of city-owned land that the state needed in order to build the bridge.

“The city was originally offered a couple hundred thousand dollars for the land and the mayor turned that into a $45 million package,” Dean said.

Residents fought for a program like Home Swap so there’d be an option for people who didn’t lose their homes to eminent domain, but who didn’t want to stay in the increasingly industrialized area. Rather than offer residents cash to move wherever they’d like, the program is designed to help repopulate Detroit neighborhoods. For the first round, the city chose to make available houses in three Detroit neighborhoods.

Due to the renovation price limit, the program makes the most sense for families that can fit in modest-sized homes. In order to participate, homeowners need to be up to date on the water bills and property taxes for the home they’d be giving up. That’s been hard for some.

“Ostensibly those are reasonable requirements but it’s just complicated,” said Michele Oberholtzer, director of the Tax Foreclosure Prevention Project at the local nonprofit United Community Housing Coalition. “It’s difficult to get someone to pay out for something that they’re then going to leave behind.”

Oberholtzer said initially more than 50 interested families were ineligible for the program. Since then, most of those families have resolved their tax and water bill issues but Oberholtzer said she hopes the city will work to find solutions for the handful who haven’t.

Walkenbach said she believes staying on top of her taxes enabled her to be one of the first people approved for Home Swap. That helped her to get the little three bedroom she’d been eyeing.

On a final walk through before signing the papers to initiate the swap, Walkenbach couldn’t contain her excitement. “My home!” she shouted, once inside.

There was caution tape over the windows. Paint chips hung from the ceiling, and there was a hole in a wall.

“Just the thought of getting a house is unbelievable,” Walkenbach said, tearing up. “See, you got me crying now.”

The renovations are supposed to take 6 to 9 months. After Walkenbach moves in, her home near the bridge is scheduled to be demolished. The city hopes to recruit and relocate 240 families for the program.