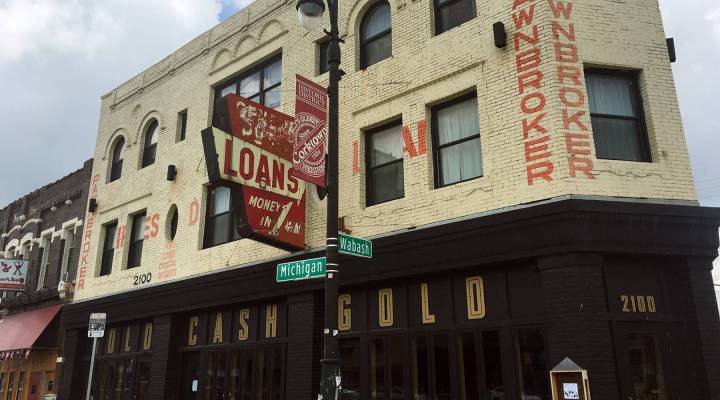 COPY
Getting a loan in Detroit, where median home values are still well below $50,000, has become rare. Lewis Wallace/Marketplace

Getting a loan in Detroit, where median home values are still well below $50,000, has become rare. Lewis Wallace/Marketplace
Listen Now

This is the second in a three-part series on the Detroit housing market. Read part one, on the city’s residents who rent from faraway buyers, and part three, on the riskier alternative for people who want to buy without a mortgage.

Hardly anyone in Detroit gets a mortgage, and that’s common knowledge. Just ask Cymone Thomas,

“There’s some beautiful homes in Highland Park … big family homes,” she said, describing the area’s blocks upon blocks of solid brick two-stories, three or four bedrooms with yards. A lot of them need work, but they can be really affordable, well below $50,000.

“I definitely want a home cause I have a son, I want him to have his own backyard,” she said. But when a home sells in her neighborhood, it’s almost always in cash.

And that’s common: in Detroit, where the median home value is still below $40,000, there were fewer than 500 home loans out of 7,700 home sales in 2014. Cash is king, and a lot of sellers push for cash-only transactions.

The U.S. housing market is in a recovery, and home prices are once again on the rise. But while some real estate markets are exploding, pockets of Detroit and other cities remain devastated post-Recession, with homes selling for way below what they were once worth.

And just getting a mortgage in those markets has gotten more difficult. The result is that in markets where single-family houses are the cheapest, there’s hardly any lending going on. The Urban Institute in 2015 studied ten other, smaller markets where, as the number of inexpensive homes has gone up, the number of mortgages under $50,000 has nonetheless declined. In the lower-end markets — potentially a source of opportunity for first-time or low-income homebuyers — there appears to be virtually no lending going on.

The reasons for the disappearing mortgages are complicated. The most obvious is that many people’s credit and wages were battered by the Great Recession. Cymone Thomas is a case in point: “I’m definitely looking into it, but my finances aren’t that great. I have excellent credit, but my income is just not there right now,” she said.

The lack of low-end lending also has to do with the institutions: the lenders, brokers and insurers who market and sell these products. In the case of Detroit, many such institutions are physically absent, and have been for a long time.

“Because realtors in Detroit haven’t been able to make money, they didn’t go away but they were not actively trying to do mortgages,” said Linda Smith, head of Detroit housing development group U-Snap-Bac — whose office is, perhaps ironically, in a former bank on the East Side. She’s been working directly with realtors and lenders to encourage them to return to Detroit’s neighborhoods.

U-Snap-Bac, a community development organization, is housed in a former bank. Many banks and lenders have disappeared from Detroit proper.

Appraisals are also an issue: in Detroit and many areas with high foreclosure rates post-Recession, homes haven’t been maintained, property values have plummeted, and many of the purchases need some degree of rehab. But in many cases, the borrower would need a loan to cover both the purchase and the rehab, and the appraisal comes in too low for the lender to approve a loan in that amount. A local public-private partnership called Detroit Home Mortgage is one attempt to address that problem through loans structured specifically for that purpose; Quicken Loans has partnered with the Detroit Land Bank Authority to fix up and then finance homes in certain neighborhoods, raising and stabilizing property values in concentrated areas.

Still, even Detroit-based Quicken isn’t aggressive about marketing loans at the lowest end of the market: the company originated 1433 home purchase loans in Wayne County in 2015, according to Home Mortgage Disclosure Act data, but just 126 of those loans were in Detroit city limits. Out of those, only 26 were loans for under $50,000. Still, Quicken is a leading lender in Detroit, and the company says it’s working to address the problems with appraisals through its land bank program.

The overall absence of financial services and lending institutions in low-income black neighborhoods is nothing new. It goes all the way back to the 1930s, to historical redlining, when the U.S. government made maps delineating which areas were safe to insure loans in, and red-inked urban black neighborhoods — indicating to public and private institutions that no loan was a good loan in the black part of town. The dearth of credit combined with aggressive housing discrimination in mostly-white neighborhoods and suburbs meant black people in U.S. cities, even those with middle-class incomes, couldn’t buy houses at fair prices.

“If you take a middle-income white neighborhood, you know it’s got nice schools, it’s got nice streets and manicured lawns, and you take away all the lending, 20 years from now, those streets would be full of potholes, they’d be down to less schools in the school district, and they’ll have more boarded up houses and the property values in those neighborhoods will decrease,” said John Taylor, who directs the National Community Reinvestment Coalition.

Decades of continued discrimination, institutional racism and lack of enforcement of federal law mean neighborhoods from Milwaukee and St. Louis to Detroit today remain in a vicious cycle of under-investment, combined with a pattern of scarcely any lending now in the same places that were originally redlined. The only time that’s ever sort of let up was during the subprime boom, when black and Latino purchasers were disproportionately sold high-priced loans.

The Community Reinvestment Act requires banks to be more proactive in the neighborhoods where they work in order to prevent even de facto redlining, but non-bank lenders don’t operate under the same rules—and make up a growing share of the mortgage market.

Tim Ross heads a Michigan lender called Ross Mortgage, in a shiny suburban building up the highway from Detroit. Ross made almost 432 loans in Wayne County in 2014, but only 15 of those were in Detroit proper, and out of those, zero were in the under $50,000 range.

“Independents like ourselves have to make a business decision as to whether or not we choose to make that investment in certain communities,” he said. He pointed to a combination of the costs of regulatory compliance, and disinterest from brokers in marketing to areas where the homes are super cheap. “It’s difficult to make a loan of that size and earn an appropriate amount of income.”

In other words, the lenders and brokers are leaving it to the city, non-profits, and cash-only investors to either rehab homes (and increase property values), or demolish once-solid structures in favor of empty lots or new development (which would also, eventually, increase property values). Either way, Detroit’s low-income population isn’t likely to get in on the ground floor of what some have hailed as a comeback.

With mortgage delinquencies at a low, can lenders afford to loosen up a bit?