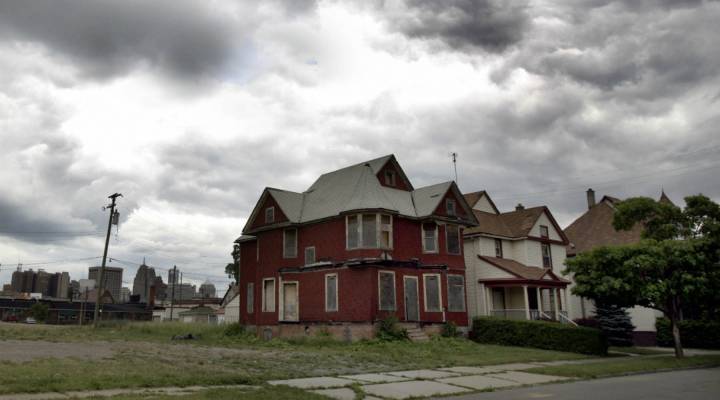 COPY
Houses line a Detroit street. In the city, the median price for an existing home is below $40,000. JEFF HAYNES/AFP/Getty Images

Houses line a Detroit street. In the city, the median price for an existing home is below $40,000. JEFF HAYNES/AFP/Getty Images
Listen Now

This is the first in a three-part series on the Detroit housing market. Read part two, on why mortgages have all but disappeared from the city, and part three, on the riskier alternative for people who want to buy without a mortgage.

The median price for an existing home in the United States right now is around $240,000 and rising. But there are some markets, like Detroit, where it’s still far below that — in the city of Detroit the median value is below $40,000.

The prospect of buying low and selling it at a decent profit or renting it to tenants has drawn a lot of international investors to Detroit. But that can create problems.

“There are a lot of people competing for these houses,” said Rob Funk, a realtor who says his business is hot right now. On a way to a house on Detroit’s east side, which he’d shown earlier in the day to a German investor, he said he sees more and more people from overseas: the U.K., China, Indonesia. The one he showed to the German guy is two stories, solid brick, with a lot of detail work inside.

“I personally love this house,” he said. But like a lot of homes that have sat vacant for years in the city, it’s missing a furnace, and needs a new roof — the repairs could add up to tens of thousands of dollars. On the other hand, he’s marketing the house at for just $9,900.

A buyer might fix it up and flip it, but local investors also buy up homes in foreclosure auctions and resell them to overseas investors as rental properties. Websites advertise a return on investment of up to 20 percent.

“That seems like a very attractive return when government bonds give you 1.5 percent,” said Stijn Van Nieuwerburgh, a professor of real estate finance at New York University’s Stern School. He says investors are drawn to the U.S. because of its relatively stable economy and to Detroit for its rock-bottom real-estate prices.

Still, it’s no secret that this is all speculation on the likelihood that home prices will continue to rise in the city. Also, cash buyers from out of town who are speculating can push up prices somewhat arbitrarily, making otherwise very low-value homes out of reach for locals. “People are essentially gambling for the resurrection of Detroit,” Van Nieuwerburgh said.

It also means growing numbers of landlords in Detroit are the very definition of absentee. Taneka Sanford is on the other side of that situation— she rents a three-bedroom in the city for $750 a month for her two kids and herself.

Taneka Sanford outside her house in Detroit. She says the backyard is unsafe to play in and that landlords have yet to fix the problem after almost a year.

During a walk through of the house, she pointed to a back hall and basement with visibly waterlogged ceilings and walls. Parts of the house smelled like mold even though she’d cleaned after a long rain. There was a hole in the roof of the garage, and a dangerous pit several feet wide and deep in the backyard that makes it unsafe for kids to play.

“When it rains it pours,” she said — meaning literally, it pours inside the house. She said she’s been asking the managers to fix these and several other problems since she moved in last November. The owners are in Taiwan.

After she withheld rent and demanded the repairs, the local management company took her to court — but a judge dismissed the case in September when the management company failed to appear in court with full documentation showing it has the authority to represent the Taiwanese owners.

Taneka Sanford scrubs the walls in her basement after every heavy rain to keep the mold down.

“I’ve never been in contact with them directly; it’s just a third party,” Sanford said.

Last year the owners agreed to cut $50 from her monthly rent, but doing more might cut too deep into their returns. Still, the rent is around three times the likely payment on a mortgage for the home, which the owners purchased for $35,000 in 2014.

It’s also not clear that the Taiwanese owners know about all the problems, or what their cut is of the rent payments. In some cases in Detroit, local intermediaries have been caught scamming overseas buyers, who saw pictures that didn’t represent the homes accurately.