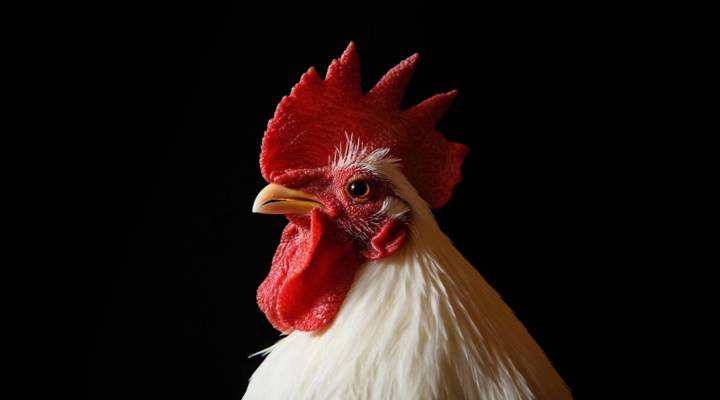 Tyson Foods isn’t just Tyson Chicken. The company includes Jimmy Dean sausages, Hillshire Farm and Ball Park franks. Tyson is a big food producer, right at the top of America’s corporate food chain. Earlier this year, the company pledged to eliminate the use of antibiotics in poultry sold with the Tyson label. Tom Hayes, Tyson’s president and CEO spoke to Marketplace host Kai Ryssdal from Arkansas, where his company is based. The following is an edited transcript of their conversation.

Kai Ryssdal: When you took over this gig a year-ish ago, what were the first couple of things you were thinking you had to do for this company?

Tom Hayes: You know, I didn’t start out thinking about what are all the things that I can bring, necessarily. It was more about how can I just do a good job and really have a positive impact on the team members? So continuing the mode of growing, and growing in a way that we can all be proud of.

Ryssdal: You did do a couple of things right away though, right? You made the announcement about getting rid of antibiotics in some of your chickens. You talked about worker safety protocols for 95,000 of your employees here in the United States. I have to imagine you took those with an eye on the realities of food as an industry but also the long-term sustainability and survivability of this company in an environment and an economy that is changing.

Ryssdal: Sorry, why was it hard to execute? Couldn’t you just sign a piece of paper and say, “Make this happen”?

Hayes: Boy, our team members would be really disappointed if they heard me say that. No, because the operations have to be absolutely clean overall from every part of the supply chain on poultry. And so we had been doing a great job, and we had been pushing towards that for, I’d say, the last seven or eight years. And we are now the world’s largest producer of no-antibiotic-ever chicken.

Ryssdal: Can we talk scale here for a second? Obviously, Tyson is one of the biggies, as we consider the companies that sell in essence protein to us, how important is it to be the biggest?

Hayes: I don’t think it’s important to be the biggest, what is important is that the biggest do the things that are the most important. We’ve got a lot of challenges getting, you know, quality food at an affordable price to the tables of folks in the U.S., for sure. But it’s also a global challenge. The backyard farms are excellent, and a lot of people enjoy them, but the world’s problems are not going to be solved through backyard farms alone. Big Food needs to get into the conversation and face up some of the realities of dealing in Big Food and to help and change the way that agriculture is going to evolve.

Ryssdal: Let me throw a phrase at you here and get your reaction. You ready?

Ryssdal: So first of all, do you eat plant-based protein?

Hayes: I do. Full disclosure, I’m more of a animal protein lover.

Ryssdal: Fair enough. Me too.

Hayes: Certainly at Tyson, we were all about protein. So for us, you know, we want to look at what are the trends that are happening and how can we continue to make the animal protein sector more sustainable. But we’re also looking at anything that consumers want, as well as can be an affordable, sustainable technology to leverage to help feed the world on a sustainable basis. So absolutely, plant protein, very excited about it.

Ryssdal: A word here about the political environment in which this economy finds itself right now. Of the things that are happening in Washington, I imagine tax reform, tax overhaul is the biggest thing for you. What are you looking for out of Washington on that?

Hayes: Oh, we’re big fans of lower taxes for corporations, for sure.

Ryssdal: Let me push on that a little bit, all right? Because the White House has been saying, “You know, what this is going to get a middle class family an average raise of $4,000. Are you going to give your workers a $4,000 raise if you get a corporate tax cut?

Hayes: We’ve been giving raises consistently. So I think there will be a part of that that does go back and is going to benefit the economy. For us, we will do things to benefit our team members, whether it’s directly in wages or adding capital to facilities that we might not have been otherwise. There’s not a lot of that, but I’d say for sure it’d caused us to be making investments for our company in terms of growth and adding jobs.