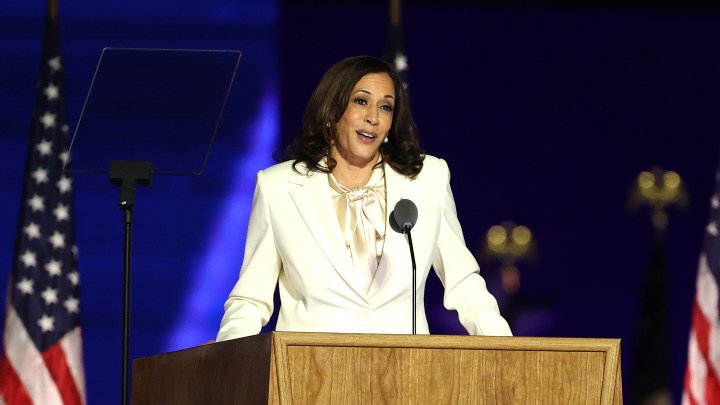 In her victory speech on Nov. 7, Vice President-elect Kamala Harris referred to Black women as the “backbone of democracy,” but could they be the backbone of the economy too?

Janelle Jones, managing director of policy and research at the Groundwork Collaborative, spoke with “Marketplace” host Kai Ryssdal earlier this year about why focusing on helping workers who are typically left behind — specifically, Black women — could benefit everyone.

With the presidential election and a few more months of economic recovery behind us, Ryssdal called Jones back to check in. The following is an edited transcript of their conversation.

Kai Ryssdal: I want to pick up with something that you raised the last time we had you on, and it was the idea of centering Black women in this economy as a way to help everybody, in essence, was the way you explained it. I wonder if now, three or four months later and an election and all that we’ve gone through, are you seeing signs that Black women are being centered in this economy any more than they had been?

Janelle Jones: I’m really, really not, which is not a surprise, but it’s always a disappointment. You know, the jobs numbers that we recently saw were around a million women left the labor force. That is shocking. We’re seeing women being pulled from the labor force, and no small part due to the caregiving infrastructure that we just will not even try to build for some reason. This caregiving crisis is intensified for Black women because we know they are more likely to be single mothers, they’re more likely to have care responsibilities. So they really do have to make the choice between caring for children, elderly folks, folks who are sick with the virus, and going to work.

Ryssdal: Yeah, well, and as you and I have talked about, Black women are often the primary wage earner in their families. Do you see in the incoming administration any signs of hope? I mean, President-elect [Joe] Biden said in his speech that Saturday night, Black America has had his back and “I’ll have yours.”

Jones: I will say I actually cheered when I heard that. I love to see us being acknowledged, and at a really pivotal moment, I think one thing that does give me hope is our vice president-elect is a Black woman. I think it’s harder not to center women in these conversations when you’re looking at one, when she’s the one asking you, what is this policy? Who will it hurt? Who will it help? You know, something that scares me a little bit, honestly, is that we will pivot too soon to austerity. We saw that after the Great Recession and we know that when that happens, it is often the most marginalized folks who are left behind. And so you know, a turn to austerity means quite literally a disinvestment from Black and brown communities. It won’t give them the resources, the support that they need to survive not just a pandemic, but also an economic recession that seems to be getting worse.

Ryssdal: I chuckle only because we did seven minutes on austerity and the austerity boom that’s coming in this economy here in the next number of months. Other than having the vice president-elect literally in the room now when those decisions are being made, what does it look like when Black women are centered in these policy discussions?

Jones: That’s a great question. I think another thing that gives me hope and in this way that can center Black folks is, you know, we saw a bunch of transition announcements over the past week. To see women of color, to see Black women being listed as the folks who will give policy proposals, who will give ideas, that makes me super hopeful. In terms of what it looks like to center Black women, I think it means giving support, I think it means measuring success based on that population. You know, there’s a lot of talk about how unemployment is low, and we’re recovering, we’re already bouncing back — the Black women unemployment rate is 9.3%. That is a crisis.

Ryssdal: You know, it’s interesting you pulled out the Black women unemployment rate because one of the things you and I talked about the first time you were on the program was using disaggregated data instead of just the headline numbers, as so often happens. And I’m reminded of that because I saw a tweet go by this morning from our mutual acquaintance — well, she’s your colleague and friend, and I’ve met her on the radio — Anna Gifty Opoku-Agyeman, who talked about having Black people doing the data analysis as a way to get to a more true representation of what’s going on in this economy. And I wonder what you think about that.

Jones: I think she’s exactly right. It is crucial, right now, as we think about where do we give targeted help? How much help do we need? You know, I see these numbers about a stimulus package. And, you know, I hate to break it to folks, but $1 or $2 trillion is just not going to do it. It’s just not enough. White women have recovered 61% of the jobs they’ve lost since the recession, Black women have only recovered 34%. You only get at that disparity if you break down the data by those demographics. And so I think it’s really, really important. We can’t just run off and say the economy has recovered if it’s recovered for white men while millions of families and communities are left with economic devastation.

Elections 2020Race and Economy
Tags in this Story
Share this Story