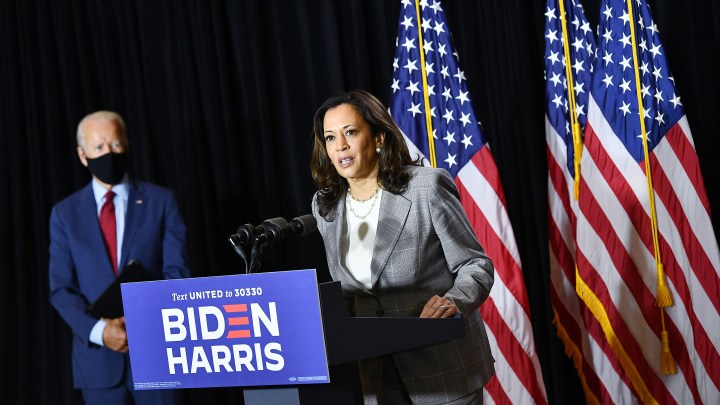 At the mostly virtual Democratic National Convention on Wednesday, Sen. Kamala Harris, D-Calif., will give a speech accepting her party’s nomination for vice president.

Harris is the first Black woman, the first Indian American and only the third woman in U.S. history to be nominated as a vice presidential candidate for a major party.

Overall, women remain underrepresented in political leadership, according to the United Nations. Just 21 women serve as heads of state.

Think of a successful global leader, and who comes to mind?

How about Jacinda Ardern, lauded for her handling of New Zealand’s COVID-19 outbreak this year? What about Sahle-Work Zewde, Africa’s only female head of state who’s made gender equality a priority? Or, maybe you think of Germany’s Angela Merkel, who has steered Europe’s biggest economy through three financial crises?

Shannon O’Connell from the Westminster Foundation for Democracy explains what makes women leaders like these stand out.

“They tend to be more consultative and inclusive. And we know from effective policymaking that consultation and bringing in evidence tend to deliver better outcomes in the long term anyway,” O’Connell said. “And that approach seems to be very organic to most women.”

O’Connell’s research shows women are more responsive to their constituents, reduce corruption and redefine what leadership in practice looks like.

“There’s a great story in the U.K. Parliament of Harriet Harman being put on the defense committee and the heads of the armed services being asked, for the first time ever, about the well-being of military families,” O’Connell said. “And they suddenly realized that had a knock-on effect of things like value for money, and effectiveness, and stability.”

According to the Pew Research Center, one thing that prevents more women in leadership positions is a lack of institutional support.

Joe Biden, the Democratic nominee for president, is trying to change that: Last week at his first joint appearance with his vice presidential pick, he made a point of expressing his unwavering support for her.

“Kamala Harris has had your back. And now, we have to have her back,” Biden said. “She’s going to stand with me in this campaign. And all of us are going to stand up for her.”

Those 10 seconds represent a turning point in American politics, according to Ella Bell Smith, who teaches management at Dartmouth’s Tuck School of Business.

“To say that, ‘I’ve got your back, what do you need?’ I’m not talking about an ally. Much more somebody that is really in the battle with you,” Bell Smith said.

Biden also ensured that Harris’ leadership will be visible.

“I asked Kamala to be the last voice in the room to always tell me the truth, which she will, challenge my assumptions if she disagrees, ask the hard questions,” Biden said. “Because that’s the way we make the best decisions for the American people.

Now it’s up to voters in November to decide whether women leadership advances in American politics.