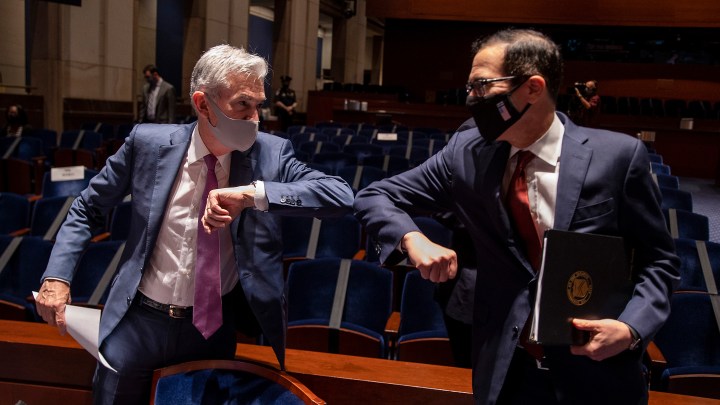 Treasury Secretary Steve Mnuchin told the Federal Reserve Thursday that he wants his money back. Well, not his money, but rather $455 million from the CARES Act.

This money supported about a half a dozen Fed programs that stabilized credit markets. The Fed, meanwhile, has all but said directly that’s a bad idea.

Another allowed the Fed to buy short-term bonds from state and local governments. Another allowed it to indirectly buy up car loans and student loans.

“They stood there and said, ‘We’ll be a buyer of these things; we will support these markets,'” said Yousef Abbasi, global market strategist at StoneX. Now the reason we care that the Fed could buy these securities is that for a while there in this pandemic, it was looking like nobody else would.

And if nobody wants to buy up, for example, loans, people aren’t gonna get as many loans. And loans are what kept some businesses alive and local governments functioning.

“You’re talking about essentially the entire credit markets could have froze or nearly froze if the Fed didn’t step in with these facilities,” Abbasi said.

“They allow for there to be liquidity or money available to banks or institutions to have them to be able to lend you money,” said Chris Campbell, chief strategist at Duff & Phelps and former assistant secretary of the Treasury.

By all accounts, these programs worked.

“Treasury felt that it has succeeded so well that it’s no longer necessary,” said Edward Altman, professor emeritus of finance at New York University.

Altman sees that as ill-advised, given the looming threat of further shutdowns. Secretary Mnuchin has said businesses need grants now, not loans.

The $455 billion in question could be repurposed into a miniature stimulus deal before a new president is sworn in.