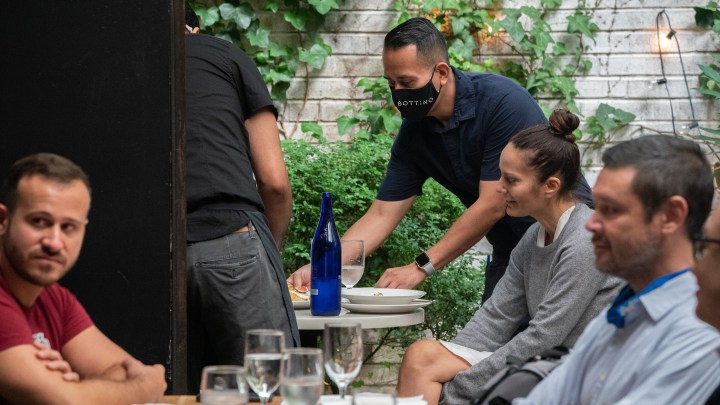 Gina Huff in Southside, Tennessee, is starting to avoid her TV — especially the news.

“Sometimes I hear it and I just turn it because it’s like, ‘OK, get over it already,'” said Huff of the media’s COVID-19 coverage. “It just seems like every day, all day, that’s what you hear.”

Huff admits she’s a bit of a media skeptic, though she’s not a virus skeptic. She wears a mask in public and takes precautions at work. But she says she’s relaxed a lot, and has even traveled to visit her kids. She’s just not so scared anymore.

“I guess faith is the reason I feel that way. If God wants me he’s taking me,” she said.

New cases of the pandemic are setting record highs as the country enters the colder months. Yet, in our most recent Marketplace-Edison Poll, taken before the election, nearly 17% of people said they don’t worry about the virus at all.

Lots of people are simply exhausted by the uncertainty, the isolation, the worsening economy and the fear of getting sick. Months of information overload, closings and reopenings and a recession have given way to COVID-19 fatigue.

“It speaks to an issue with human physiology,” said Shannon Suo, a health sciences professor at the University of California, Davis. “We can only stay on alert for so long and we sorta poop out.”

At the beginning of the pandemic, people were running on adrenaline, hyperaware of anything that could put them at risk. But humans aren’t wired to stay in a state of fight-or-flight for this long.

“So the complacency is real. But the complacency is dangerous,” Suo said. “And the key to this is moderation. Because this is a marathon, arguably it’s an ultra marathon.” She said it’s most important to stay vigilant about masks, hand-washing and social distancing.

“When we go outside, masks are on, we wash our hands, we got all the chemicals and everything else,” said Tony Burditt, who’s 64 and lives in Sealy, Texas. “Plus, we didn’t go around people we felt were taking excessive chances.”

Burditt and his wife have formed a social bubble with friends. He said he’s not worried about getting the virus, even though he knows seven people who’ve died from it, because we know more about how to protect ourselves than we did in March.

And he’s armed with something he says he picked up during his military career. “I have patience,” Burditt said. “I’ve learned to have patience.”