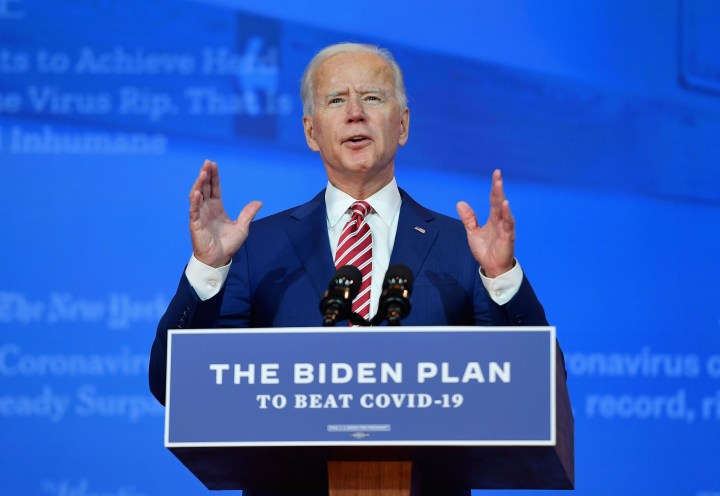 After several days of vote counting, Joe Biden is set to become the next president of the United States.

Biden won Pennsylvania, pushing him past the 270 electoral votes he needed and prompting the Associated Press to declare him the winner.

The president-elect will inherit an economy ravaged by the COVID-19 crisis, which has led to more than 235,000 deaths, 22 million jobs lost (half of which it’s barely recovered) and an unemployment rate that reached almost 15% in April.

Some of Biden’s key plans include providing paid leave for sick workers, investing $700 billion in a “Made in All of America” campaign, moving toward cleaner energy, and protecting the Affordable Care Act. But they will likely face obstacles with a divided government.

The Senate race is still unclear, with the Republican party in control of 48 seats and the Democratic party with 46 (plus two Independents, who caucus with them). Two races in Georgia have yet to be decided, and could head to runoff elections that won’t be decided until January. If the Democrats gain those seats, they’ll have a 50-50 deadlock and a vice president who gets to break any ties.

Mark Zandi, chief economist for Moody’s Analytics, told Marketplace that he expects the economy to get to full employment about three years from now under a Biden presidency and a split Congress. (A second-term Trump presidency with a split Congress would have an even longer delay because of Trump’s trade and immigration policies, according to Zandi.)

Keith Wade — the chief economist at Schroders, an international asset manager — also noted that a split Congress under Biden will likely pass more stimulus, which would add two- to three-tenths of a percentage more in terms of GDP growth.

Here’s a closer look at some of the plans and policies that Biden is advocating for:

COVID-19 continues to spread across the country, with the U.S. reporting a record 120,000 cases in a single day on Thursday. To address the pandemic, Biden has proposed “eliminating cost barriers” when it comes to preventing the disease and caring for those affected by it. Some of his plans include:

Biden has branded his vision for the future of U.S. jobs as “Made in All of America.” He wants to strengthen domestic manufacturing, as well as public and private sector unions. Here are some of the priorities he’s outlined:

Biden’s tax plan aims to increase taxes on high earners and reinstate policies that had been in place prior to the Trump administration. It includes:

An analysis of Biden’s policies from the nonpartisan Penn Wharton Budget Model found that between 2021–2030, Biden’s platform would raise $3.375 trillion in additional tax revenue, increase government spending by $5.37 trillion in areas like education and Social Security, and decrease the federal debt by 6.1%.

Over the summer, Biden announced a $2 trillion plan to combat climate change and invest in clean energy, with the long-term goal of achieving net-zero emissions by 2050. His goals include:

The effects of climate change have especially been in the national spotlight recently as wildfires have spread across the West Coast, which experts attribute in part to climate change. While Trump blamed the wildfires on forest management, Biden has acknowledged the role of global warming in these disasters and called Trump a “climate arsonist.”

Within the Democratic party, House Rep. Alexandria Ocasio-Cortez and Sen. Ed Markey have proposed a Green New Deal, a broad vision that calls for reducing greenhouse gas emissions, adding millions of new jobs and providing universal health care. While Republicans have claimed that Biden is pushing for the GND, his plans are far less sweeping and wouldn’t include universal health care.

“The Green New Deal that the president keeps trying to talk about — it’s not a bad deal. But it’s not the plan I have. That’s the Biden Green Deal,” Biden said during an interview with CNN.

Biden’s position on fracking, which has been muddled, also diverges from the climate proposals to those left of him.

While Trump and other Republicans say that he wants to end the practice, Biden has recently been adamant that he doesn’t. “I’m not banning fracking in Pennsylvania or anywhere else. I’m going to protect Pennsylvanian jobs, period,” Biden told supporters in the state this October.

However, when asked back in 2019 whether there would be “any place for fossil fuels, including coal and fracking, in a Biden administration,” he said “we would make sure it’s eliminated.”

He also mentioned he was against “new fracking” in a primary debate earlier this year.

Biden has released plans aimed at investing in the “economic mobility” of communities of color, which would entail:

The House of Representatives also wants to establish a federal commission for reparations that would create a proposal and remedy plan, which Biden has endorsed.

“Relative to his predecessors, that’s pretty dramatic,” said Vincent Hutchings, a professor of political science and Afroamerican and African studies at the University of Michigan.

Calls for economic reparations for the African descendants of slavery have intensified in recent years, with Democratic candidates voicing their support on the issue in some form or another.

However, Hutchings pointed out that Biden has not outright said he’s in favor of reparations. Given the amount of racial inequities in the U.S., Hutching said he thinks anything short of reparations is unlikely to be effective.

These figures are reflective of how most of the wealth in the country is skewed toward a relatively small number of wealthy, mostly white, people.

Many activists have also called for defunding the police, a proposal that became the topic of national conversation after George Floyd was killed by a police officer in Minneapolis.

A Washington Post analysis found that Black and Hispanic Americans are killed by the police at a disproportionate rate. While Black Americans account for less than 13% of the U.S. population, they are killed at more than twice the rate of white Americans.

Biden has written that he does not support defunding, and has instead proposed investing $300 million in policing that would involve changes like more diverse police officers and more body cameras.

Protecting the Affordable Care Act is one of Biden’s main priorities when it comes to health care. His plans for health insurance include:

Unlike other Democratic leaders, such as Bernie Sanders, Elizabeth Warren and Alexandria Ocasio-Cortez, Biden has backed away from Medicare for all and has said he would veto it due to the costs. That position has created a divide between the party’s center and those on the left.

“But he is pushing for a public option to the Affordable Care Act, which is further than Obama pushed it,” Hutchings said. “[Obama] did campaign on the notion of a public option, but then he backed away from it.”

One of the primary aims of Biden’s higher education plan is to help Americans “join or maintain their place in the middle class.” Some of his key plans are:

Biden has proposed investing $640 billion over the next decade for housing that’s affordable and also accessible to those with disabilities, which would include: