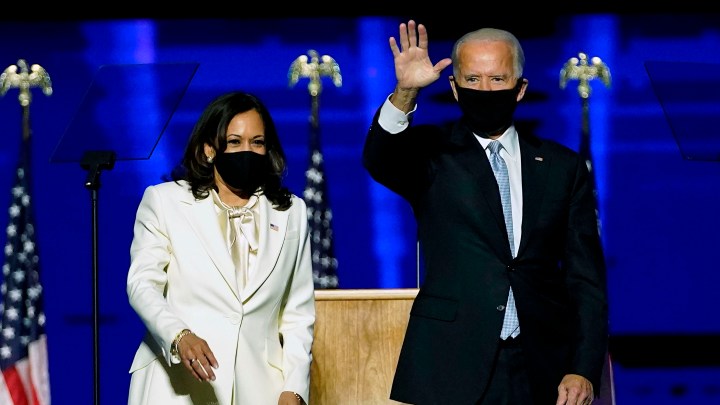 What might be President-Elect Joe Biden’s early moves to help households get through the economic turmoil of the pandemic?

Felicia Wong is a member of the Biden transition advisory board, but spoke with “Marketplace Morning Report” host David Brancaccio on Monday morning from her perspective as the president and CEO of the Roosevelt Institute, a nonprofit, liberal-leaning think tank. The following is an edited transcript of their conversation.

Felicia Wong: Right away this week, the Biden team is going to name a pandemic task force. And interestingly, that’ll be, of course, about public health. But it’ll also have a lot of elements for economic strengthening. The Biden team wants to make sure that we can produce masks and PPE domestically. There’s going to be a fund for state and local governments to prevent budget shortfalls, to help teachers, to help first responders, to keep those people employed even in an economic crisis. They’re talking about an emergency funding package for schools and small businesses so they can adapt to COVID. These are very immediate things that I think that task force will tackle right away.

Working with a Senate controlled by Republicans

David Brancaccio: But some of this has to be in cooperation — at least during the transition period — with the existing Senate run by Republicans. So can much really get done on spending stuff before the new Congress comes in?

Wong: Good question. I do think you’re going to see real efforts, very quickly, including before inauguration, on a kind of relief plan or a stimulus package. And I think that will include all of the things I just mentioned. It will also include stronger unemployment insurance. It’ll include an improved mechanism for helping small businesses, maybe through rent relief, maybe through more funding to keep workers on payroll. And I think it will also include funding for state governments and for city governments, which of course are under such crisis. That crisis, that economic crisis, is only going to get worse as the winter wears on.

Now, whether Republicans are going to come through and actually do this with Democrats is an important political question. But I think they are definitely incentivized to do that now that they know who is going to be in charge in Washington. And you’re going to see a lot of red state governors wanting that funding in addition, of course, to blue state governors.