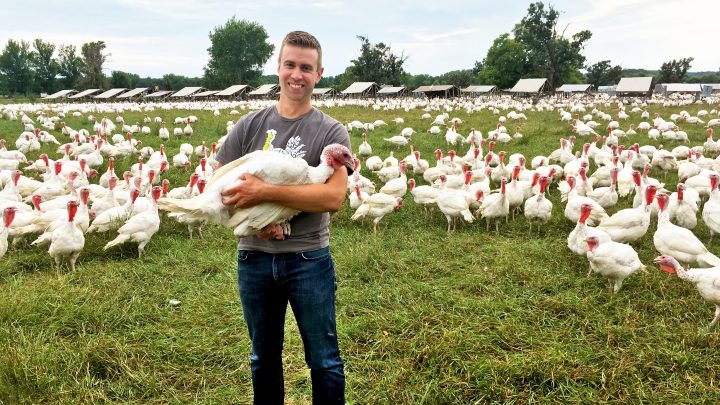 John Peterson’s family has been in the turkey business for 80 years in Cannon Falls, Minnesota. And getting ready for Thanksgiving — the turkey industry equivalent of the Super Bowl — is usually pretty routine.

Not this year. Thanksgiving is typically all about big. It’s the biggest travel week of the year, there are big family gatherings, there is the big family meal, and at its center is often a big bird. But this year, people are expected to gather in smaller groups and have smaller dinners. So grocery stores have been pressing suppliers for smaller turkey and more of them.

The problem is turkey farming is a science. The birds are engineered to reach Thanksgiving size at Thanksgiving. For Peterson, who sells his turkey under the name Ferndale Market, that sweet spot is about 18 pounds. And he can’t just flip a switch and change that.

“We’re working with nature, and we only have so much control over their rate of growth,” Peterson said. “And when their hatch date was determined a year in advance, a lot of that cake was baked before we had the chance to change it.”

Peterson has slaughtered some of this birds early, at around 12 pounds. But that comes at a cost. He’s had to rent extra freezer space to store the turkeys. Plus, he’s really a free-range, fresh turkey farmer. Those birds go for about 40 cents more per pound than frozen. And selling any birds at a lower weight means there are fewer pounds to sell.

It’s why the industry is on a mission to keep the demand for big turkeys alive by marketing the idea that cooks will be blessed — not stuck — with leftovers.

“If anyone’s like me, I’ve been cooking more than I’d like to over the past few months,” said the National Turkey Federation’s Beth Breeding. “So I’ll definitely take a break with some great turkey leftovers.”

Some of the recipes on the association’s website: turkey eggs benedict, turkey tandoori kabobs and Korean turkey dumplings.

If you’re not a fan of turkey for breakfast, lunch and dinner, there are alternatives to the big bird. Turkey producers, like Butterball, have ramped up production of smaller products, like boneless roasts that weigh in at about 3 pounds. They’re also offering more turkey parts and products that cook in their own bag. The idea isn’t just to appeal to cooks with fewer people to feed, but first-time hosts who may be intimidated by a whole bird.

“It helps people who are like, ‘Boy, I’m a little bit nervous about how you attack this whole thing,'” said Kyle Lock, senior director of retail marketing at Butterball. “The centerpiece of this thing has to be right, right?”

The meal kit industry, which has received a boost during the pandemic, is also looking to help cooks get their holiday meals across the finish line. Companies like Blue Apron, HelloFresh and Home Chef are all offering special Thanksgiving boxes.

Despite all the competition, Minnesota farmer John Peterson is still banking on families going the traditional route.

“Maybe we’re just trying to delude ourselves, but I do think there are reasons to think that now more than ever people are craving tradition,” he said. “So we’re optimistic that people aren’t going to be, you know, eating ham sandwiches with their green bean casserole on Thanksgiving.”

In the end, it all comes down to who will be stuck with the leftovers — the turkey industry or us?

Turkey prices are down again this year