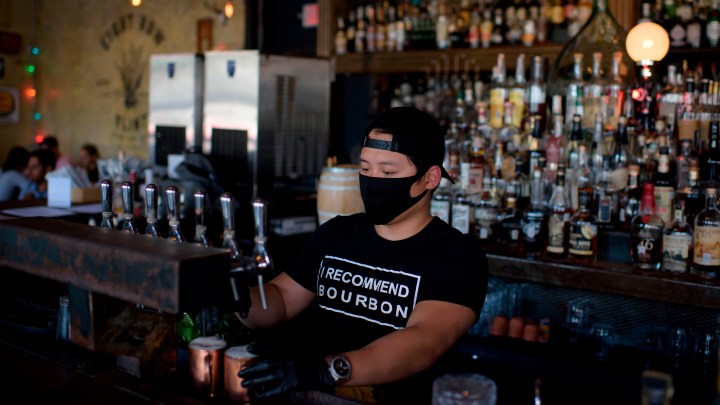 COPY
A bartender makes drinks at Eight Row Flint in Houston, Texas. Many young people work in the leisure and hospitality industry, which is bouncing back from the coronavirus recession. Mark Felix/AFP via Getty Images
Economic Anxiety Index®

A bartender makes drinks at Eight Row Flint in Houston, Texas. Many young people work in the leisure and hospitality industry, which is bouncing back from the coronavirus recession. Mark Felix/AFP via Getty Images
Listen Now

If you were to lose your job today, how confident would you feel about finding a new one within six months? That’s a question we asked in our latest Marketplace-Edison Research poll — and it’s especially relevant in this pandemic recession.

Evan Niedrauer is 32 years old and lives in Los Angeles. He works as a lighting designer, which means he does a lot of different things.

“I’ve got my own personal line of lamps and chandeliers,” he said. “I’m refurbishing some lights at a 1950s diner.”

The way Niedrauer puts it: He has his fingers in a lot of pies.

“I’m overseeing some electrical work being put into a kids’ museum in Santa Monica, and I’m building a custom LED mask for a MMA fighter,” he said.

When the Marketplace-Edison Research Poll asked, Niedrauer told us he’s very confident in his ability to find work within six months.

In fact, only about one in seven respondents between the ages of 18 and 34 told us they’re not confident in their ability to find work.

Niedrauer said if his current gigs dry up, he has a lot of skills he could fall back on.

“I could find something that could get me by, that I wouldn’t necessarily be satisfied doing, but I would have the skills to make some sort of wage,” he said.

Younger workers haven’t had as much time to focus on a specialty, said Peter Orazem, labor economist at Iowa State University.

As a result, “the skills they have tend to be more general and more applicable to lots of firms,” he said.

After the Great Recession in 2008, Orazem said older workers were unemployed about twice as long as younger workers.

“What you found was that the younger people were much more flexible in terms of switching to a different type of a job,” he said.

Younger workers are also generally more optimistic about the economy, according to Sarah House, an economist at Wells Fargo.

“They tend to have a more upbeat assessment of their future earnings, their ability to save for retirement [and] even what interest rates they might get on their savings account,” she said.

And the recovery — so far — may be boosting their optimism. Many young people work in the leisure and hospitality industry, which was hit hard at first, but has been bouncing back vigorously.