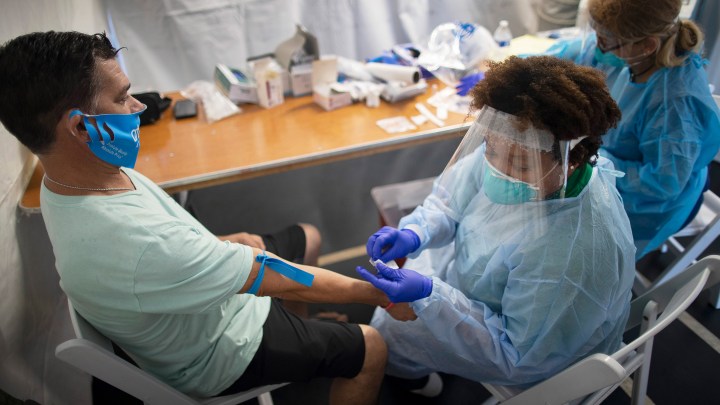 A doctor prepares to take blood from a patient for a COVID-19 antibody test in Miami Lakes, Florida. Joe Raedle/Getty Images
Listen Now

Last week, 898,000 Americans filed first-time claims for unemployment. That’s more than the week before and more than economists expected.

What risk does this present during the pandemic, and what options do those folks have?

That data on how many people have lost their employer-sponsored insurance is just an estimate. But Karen Pollitz, a senior fellow at the Kaiser Family Foundation, said, “We know because there’s so much job loss and so much income loss that there are people who are certainly at risk for losing their coverage if they haven’t actually lost it already.”

But if that’s your situation, there are some other options depending on where you live.

“We’ve estimated probably 85% of these adults are eligible for either marketplace coverage or for Medicaid coverage,” Pollitz said.

Even when those options are available, said Steve Woodbury, professor at Michigan State University and senior economist at the Upjohn Institute, the newly uninsured might not be able to get them.

“This is very disruptive. You’re moving from an employer-sponsored plan to something else,” he said. “And just the time that it takes to go about searching and these people are worried enough already because they’re unemployed. It’s a hardship.”

And Woodbury said a global pandemic is about the worst time to have more people without health insurance.

Stan Dorn, senior fellow at the consumer advocacy group Families USA, said that’s because the uninsured are 75% less likely to go to the doctor if they need to.

“That means if you come down with COVID-19, you don’t know it and you start experiencing symptoms, you are understandably going to put off getting care because you’re worried about going bankrupt,” he said.

Dorn said the consequences of so many uninsured are huge. Not just for those experiencing it, but for the nation as a whole.