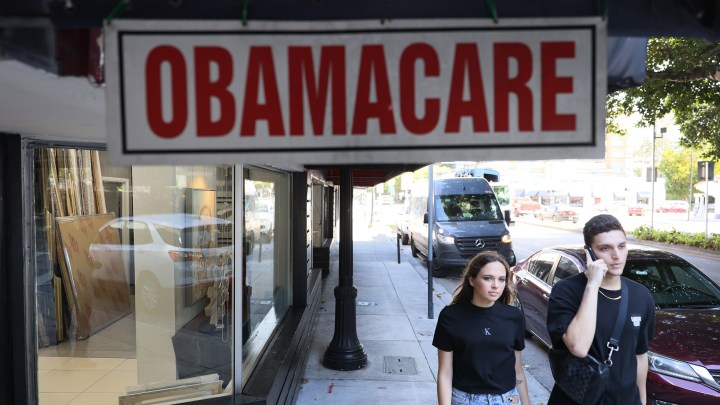 COPY
Pedestrians walk past a Miami that offers plans under the Affordable Care Act, also known as Obamacare. ACA enrollment is at an all-time high, according to the Biden administration. Joe Radele via Getty Images

Pedestrians walk past a Miami that offers plans under the Affordable Care Act, also known as Obamacare. ACA enrollment is at an all-time high, according to the Biden administration. Joe Radele via Getty Images
Listen Now

The number of Americans seeking unemployment benefits moved up last week to 332,000 from 312,000 the week prior, which was a pandemic low. While losing a job can often mean losing health insurance, the Biden administration says a record number of Americans are now covered by insurance through the Affordable Care Act; nearly three million Americans signed up during open enrollment between February and August this year.

The Biden administration’s special six-month enrollment period gave San Diego attorney Erin Benler-Ward time to find a plan for her 22-month-old son. He was covered through her work, but the premiums were $300 a month. So she shopped California’s marketplace for plans.

“Luckily, they were about half the price that my employer was offering for dependent health care coverage,” Benler-Ward said. She signed up her son in June.

The pandemic has created unique economic circumstances that have boosted enrollment, according to Jeffrey Clemens, an economics professor at UC San Diego.

“A great deal of churn has hit the labor market because of the pandemic,” he said. That churn has come from layoffs, employees quitting and some people deciding to change careers altogether. “Under circumstances like that there’s, of course, a lot more value to opening up some additional enrollment opportunities,” Clemens said.

Because, he added, that’s one of the reasons for the health insurance exchange — people don’t have to rely on employers for coverage.