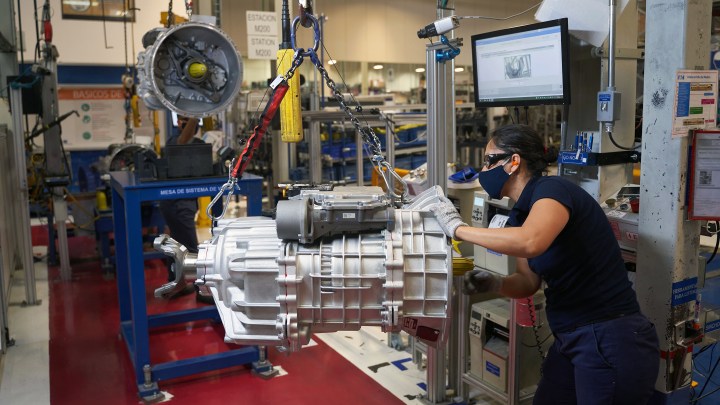 COPY
Auto industry activity is resuming at factories in Mexico. But, unions are concerned about working conditions. Mauricio Palos/AFP via Getty Images
COVID-19

Auto industry activity is resuming at factories in Mexico. But, unions are concerned about working conditions. Mauricio Palos/AFP via Getty Images
Listen Now

Mexico and the United States are deeply connected by trade, with very close ties in the automotive industry. In mid-May, the sector started to reopen in Mexico after pressure from lobbying groups on both sides of the border.

A new U.S.-Mexico-Canada Agreement took effect on July 1, 2020. It requires the auto industry to standardize workers’ salaries and use more materials that come from the three countries.

Miguel Barbeyto, Mazda Mexico’s president and CEO, said the company is getting ready for that, while dealing with protocols around the pandemic. “So, we need to work hard,” Barbeyto said.

But unions are concerned about current working conditions in auto plants.

Benedicto Martínez is a coordinator of Frente Auténtico del Trabajo, one of the unions in Mexico with members in the automotive industry. He said unions are watching the pandemic protocols carefully at factories.

Pedro Tello, an economic analyst in Mexico City, said reigniting the auto industry will help normalize the country’s economy. But he points out large companies in Mexico, like automakers, have not received any tax incentives or loans from the federal government, and that the country may lose companies and jobs.