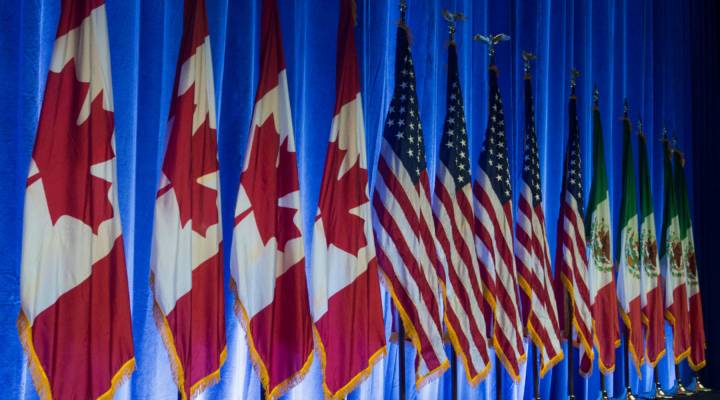 The United States, Mexico and Canada concluded their first round of NAFTA renegotiation talks in Washington, D.C. on Sunday. President Trump has been promising to renegotiate the agreement, signed in 1994, saying it has shifted jobs to Mexico and resulted in large trade deficits between the U.S. and its neighbors.

The three countries released a joint statement which said they’re committed to modernizing the trade pact.

One of the issues that has popped up in these early negotiations has to do with so-called “rules of origin,” which stipulate that a certain percentage of a product — its parts and materials — has to come from one of the NAFTA countries to be exempt from border taxes. For cars, for instance, it’s about 62 percent.

The U.S. wants to set the bar higher overall, so more of each product comes from within the NAFTA bloc. It also wants to impose a rule specifically on cars and auto parts: that a set percentage of these products’ components come exclusively from the U.S.

The reason U.S. negotiators are focusing on the auto industry comes down to the U.S. trade deficit with Mexico. Last year, Mexico exported about $64 billion more in goods to the U.S. than it bought. A big part of that trade deficit is the sale of cars and auto parts made in Mexico.

Mexico’s and Canada’s negotiators are pushing back on the U.S. proposal, because it would put their companies at a disadvantage.

U.S. auto companies are against the change too. The American Automotive Policy Council, which represents Detroit automakers like General Motors and Ford Motor, has spoken out against it. Stricter rules about where they get parts can disrupt their supply chains and raise costs.

The United Auto Workers Union, on the other hand, is in favor of tightening the rules of origin.

The next round of talks will take place in Mexico City in about two weeks, and they’ll continue on and off throughout the year.