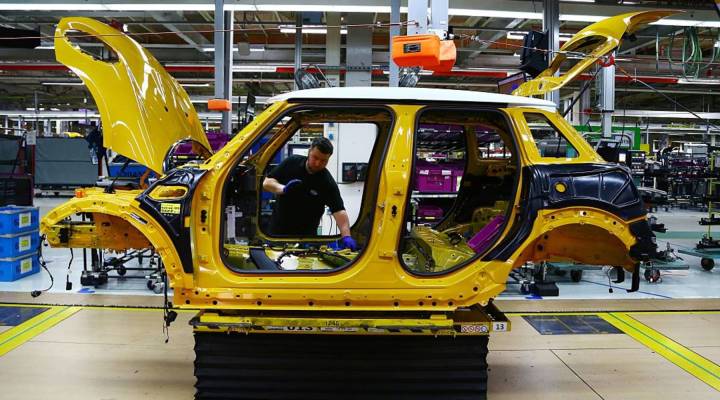 This week, major automakers and the companies that make their parts met in Mexico City to discuss how trade policies under the Trump administration could affect them. Los Angeles Times’ reporter Natalie Kitroeff went to the conference and reported on what was going on there.

On Mexico as a hub for automakers:

[At the conference there are] the big three automakers Ford, GM, Fiat Chrysler. All of the European [carmakers] as well. The Japanese carmakers, [too].

You know, Mexico has become a powerhouse in carmaking not just because of low labor costs, but because they’ve developed this very strong network of basically folks at this conference. So you have the carmakers and then you have the auto parts suppliers and the railroads that take them across the border. So it’s a group of people that have enjoyed unbridled success for the last several years. You know, what will happen as Trump sort of moves to potentially renegotiate NAFTA or institute some border adjustment tax (potentially) remains to be seen.

About the conversations these automakers are having about NAFTA and potential import taxes:

There is a lot of speculation without much real information behind it about what’s going to happen. I mean, ending NAFTA all together would be a huge blow for the carmakers. Trump’s press secretary floated the idea of a 20 percent tax on Mexican imports and then walked that back, but that, they say, would really affect consumers, and the consumers, they say, are in the United States. What they don’t add is that that will probably also affect their sales. Right? I mean if people are priced out of buying basic kind of compact cars, which is generally what’s made here, although there are also pickups here, that will hit their bottom line too. So a lot of speculation.

On NAFTA and jobs in the U.S.:

There are a lot of U.S. jobs that are intricately tied to trade with Mexico. We’re not just talking about sales jobs in the U.S. or, you know, parts-making jobs. We’re talking about railroad jobs, trucking jobs, you know, a lot of blue-collar kind of employment here. There are also, though, manufacturing jobs in the United States that are tied to the work that’s done in Mexico, and that’s because Mexican cars are not actually entirely Mexican. Of the cars that we imported from Mexico in 2015, 40 percent of the contents were made by Americans. So you can imagine, I mean, stanching the flow of cars that contain 40 percent American parts across the border would most certainly affect American jobs.

What’s left out of conversations about the debates around manufacturing?

Cars don’t get made in one factory in Michigan anymore. The supply chain globally is advanced to the point where all of the kind of advanced economies have other partners that are perhaps less advanced. We’re talking about places like Japan and Germany. They’re all relying on countries that are less advanced that can produce some part of the product that they also make there. This is happening across the globe.

Here at this conference, for example, some of the automakers were saying, if the Americans are worried about Mexicans “taking their jobs,” then the Germans should be up in arms. The Japanese should be up in arms. I mean, this is happening everywhere. The way that these supply chains work is that a car can cross the border between the U.S. and Mexico as it’s being made, five, six, [or even] nine times. That means that the way we work and we build things now is that our jobs depend on their jobs.

[Also], you know automation is happening across the globe. This isn’t like we’re exporting 1950s America to Mexico. We are exporting 2017 American manufacturing to Mexico, and yes, people are being lifted into the middle class. And yes, there are manual labor jobs, and it is much cheaper to do in Mexico, and Americans in the Rust Belt have every right to be concerned and worried about what that means. But Mexicans are also getting totally automated factories. So the factory of today is not creating as many jobs in Mexico as it did in the U.S. in 1950.