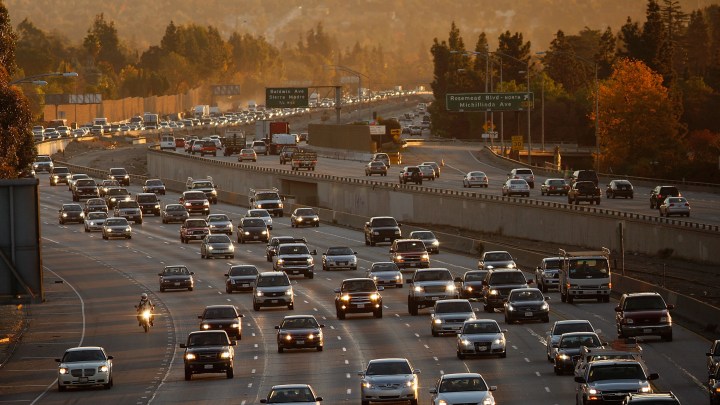 COPY
Morning commuters travel the 210 freeway between Los Angeles and cities to the east near Pasadena, California. David McNew/Getty Images

As four automakers — and perhaps a fifth — have chosen to abide by California’s strict emissions limits, new analysis suggests if the remaining automakers join them, total emissions cuts would be “on par” with targets set by the Obama administration.

Already, Honda, Ford, VW and BMW have chosen to follow California’s rules. California has unique legal permission to set its own standards, and 13 other states have signed on as well. News reports suggest Mercedes-Benz could become the fifth. Under the California standards, average vehicle fuel efficiency across each brand’s fleet would rise from 34 miles per gallon today to more than 45 in a decade.

Collectively, if every automaker in the U.S. market signed up, the emissions cut would be “on par” with auto industry targets set by President Obama. The Trump Administration wants to roll back those targets to significantly lower levels for fuel efficiency and emissions cuts.

“This is a way for the auto industry to get almost to the Obama standards,” said Hannah Pitt, who ran the analysis at the Rhodium Group consultancy, “and make a significant emissions impact in the transportation sector without the federal government being involved.”

Auto industry analysts said carmakers see clean car rules coming already in Asia and Europe, and want the efficiencies of making similar cars around the world. “They want to spread the development costs, and the implementation costs, around the world,” said independent industry consultant Alan Baum.

A new administration, a new mandate. So let the lobbying begin.