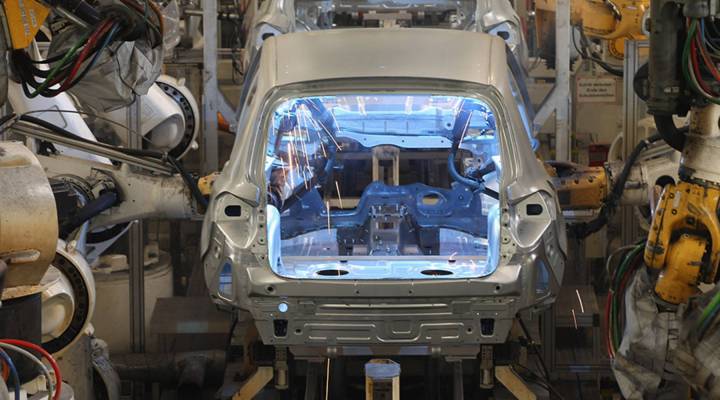 COPY
Robots weld the bodies of Volkswagen Tiguans at the Volkswagen factory in 2012 in Wolfsburg, Germany. Sean Gallup/Getty Images)

Robots weld the bodies of Volkswagen Tiguans at the Volkswagen factory in 2012 in Wolfsburg, Germany. Sean Gallup/Getty Images)
Listen Now

Steel and aluminum have been getting most of the tariff coverage, but automakers, specifically European carmakers, are getting some attention on their willingness to negotiate tariffs on U.S.-imported vehicles. Marketplace host Kai Ryssdal talked to William Boston, reporter from the Wall Street Journal, about the proposal and how that is going to play in the global car market.

Kai Ryssdal: What is the proposal that does seem to be on the table here then?

William Boston: Well, just to be clear, the carmakers themselves can’t make any proposals. So that’s the prerogative of the European Commission. But the carmakers have in conversations with the U.S. ambassador here have said that they would have no objections to reducing import tariffs on automotive products to zero.

Ryssdal: The catch of course being that they then want the Trump administration to drop all this talk of taxing European automotive imports to the United States and all the rest of it. It’s got to be all in both ways, right?

Boston: Exactly. It has to be reciprocal, that’s one thing. And negotiations with the Trump administration cannot begin until Trump takes his threats of imposing punitive tariffs against Europe off the table.

Ryssdal: Talk to me for a minute then about the news of this morning over here in the States that Daimler’s reporting serious problems with potential earnings given China issues, and the global nature of the car business today and how these tariffs figure into that.

Boston: Right. Well, this is one of the fascinating aspects of this whole discussion is that one of the first victims of a trade war is likely going to be American workers. One really good example of this is this week, Volvo opened a new plant in the United States. And I was talking to the CEO of Volvo yesterday about the plant in light of the trade discussion, and he said, “Well, right now we have 1,200 people employed. In three years, we’re going to add a second model, and we want to boost employment to 4,000 people.” But that can only happen if there isn’t a disruption through the trade discussion because half of those people will be building cars for export. Foreign automakers are actually contributing to the trade balance of the United States by producing a large number of cars that are exported to Europe, to China, Latin America and elsewhere.

Ryssdal: Trade balance — when you say trade balance, you mean, of course, the positive aspect of the American trade balance as opposed to what the president likes to point to, which is the deficit.

Ryssdal: Yeah. A lot of economists I’ve talked to have been saying, “Look, if you really want an indicator of when this trade war chatter that we’re all doing here gets serious, when they put cars on the table? That’s the one.”

Ryssdal: So when you go out for a beer or a cup of coffee, is trade war on people’s minds? Or are they talking about other stuff?

Boston: They’re talking about a lot of things here. Immigration is a huge issue in Germany because the government itself is divided over how to deal with migrants and illegal immigration. When you talk to business leaders then the global environment is really the most important thing for them — stability and being able to make long-term business decisions based on a predictable set of rules. And that’s what worries them about the trade regime is that, you know, they spent billions of dollars building plants in the United States. Now they don’t know whether or not those plants are going to be profitable.