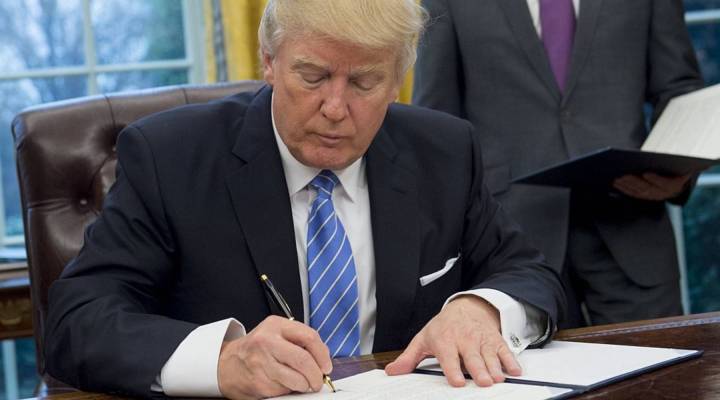 When the United States, Mexico, and Canada launched the negotiations for NAFTA, each nation sent a delegate to work out the details. Mexico sent Dr. Jaime Serra, the Minister of Trade and Industry there at the time. He joined Carla Hills from the United States and Michael Wilson from Canada. The trio worked together over several months to put together the deal. Marketplace host Kai Ryssdal talked to Serra about his experience and what he sees for the future of NAFTA in the Trump administration. An edited transcript of the conversation follows.

Kai Ryssdal: How did it come to pass that you were the guy sitting at the table doing the NAFTA negotiations 25ish years ago?

Jaime Serra: Well, I was then the minister of trade for Trade and Industry in Mexico. Our relationship with the U.S., which is a very natural relationship in terms of trade and other fronts and trade, was not substantive enough given the fact that we were neighbors and that we will be neighbors forever. And we had a series of agreements that were just getting to that limit. So it was quite obvious that we had to change the rules in order to have a better trade for both other countries. And Canadians, that’s something that I think should be in the mind of the negotiators this time around.

Ryssdal: Well, as long as you brought it up, let’s skip ahead to the things I wanted to talk about, and let me ask you about this idea that President Trump has of either getting rid of or renegotiating NAFTA. What do you think of that?

Serra: Well, I assume there’s a sequence, right? That you renegotiate, and if the renegotiation doesn’t succeed, then probably any country in the agreement can remove itself from from the agreement. I think it would be a mistake because what we have now is a very competitive North American region. For every dollar Mexico exports to the U.S., it has 40 cents of U.S. content in any product we send to the U.S. Well, for every dollar that the Chinese send to the U.S., it has four cents of content of American products. So in that sense, Mexico contributes to the competitiveness of the U.S. economy and contributes to the competitiveness of the region as a whole, as opposed to the case of pure outsourcing, which is the relationship the U.S. has with China and other countries. So as I’ve been saying, we’re on the same side of the table, and we are part of the solution, not part of the problem.

Ryssdal: People are of two minds about NAFTA in the United States. Part of that has been exacerbated by the recent political campaign. I wonder what Mexicans think of NAFTA and where it has taken that economy.

Serra: I think that the feeling towards NAFTA in Mexico is a positive one because what it did was basically help the country to modernize and to become much more of a manufacturer than a commodity exporter. As you know, Mexico was and had been before NAFTA pretty much oil dependent. And now, you know oil represents very little of our total exports. So the transformation that Mexico has experienced going from, you know, basically an oil exporter to a manufacturing exporter has been very positive, and it has contributed, again, to the growth of manufacturing in the U.S. and manufacturing in Canada because we complement each other. Our economies are very complementary with each other, no more than substitutes.

Ryssdal: You understand that if you go to certain places in the United States, the upper Midwest being the most obvious example, that is exactly the opposite of way of the way people see it.

Serra: Absolutely. And I think that there is some confusion there because the reason for the trade deficits the U.S. has, or the lack of employment in those areas, is not the fact that they have a future agreement with Mexico. It is a different kind. It is automation, robots, technological change, different forms of training, different training for the workers. That is what explains the situation there. Not NAFTA. Actually, if you look at the numbers, Kai, 90 percent of the trade deficit is explained of trade that the U.S. has with countries with whom they do not have a free trade agreement.

Ryssdal: If President Trump actually does reopen negotiations on NAFTA, what should Mexico be looking for out of this round of talks?

Serra: I think that we need to understand that basically there are two options. One is to introduce protectionist measures within the region, which I think would be suicidal. Truly speaking, I think we would be shooting our own foot because if we introduce protectionist measures within the region, we’re going to make the region less competitive. The other approach is to enhance the integration of North America and to make the region more competitive. Like, for instance, to be more competitive with China. So if we agree on that general principle, I think that the potential negotiations could improve quite a bit: our instruments, and our relationship, and therefore the potential benefits for both economies.

Ryssdal: I wonder, though, if there’s a failure to agree on those basic principles, right? Because President Trump has said, pretty clearly, “NAFTA is the worst trade deal ever negotiated.”

Serra: Yes. Well, I understand that those things were much more of a political moment, I hope. Because the evidence shows that the countries have benefits from NAFTA.

Ryssdal: Respecting the fact that you, in your professional life, were a trained negotiator and diplomat, I guess, in some way, do you take it personally when a President Trump says all these horrible things about this deal that you spend so much of your time working on?

Serra: No, not at all. I’m sure President Trump doesn’t mean that to be personal, but more sort of an approach to an issue that he cares very much about. But I don’t take it personally. By the way, I never studied negotiation or diplomacy. I’m not a diplomat. I’m an economist, and probably that’s what helped the fact that I’m not a diplomat. But I don’t want to love or hate that.