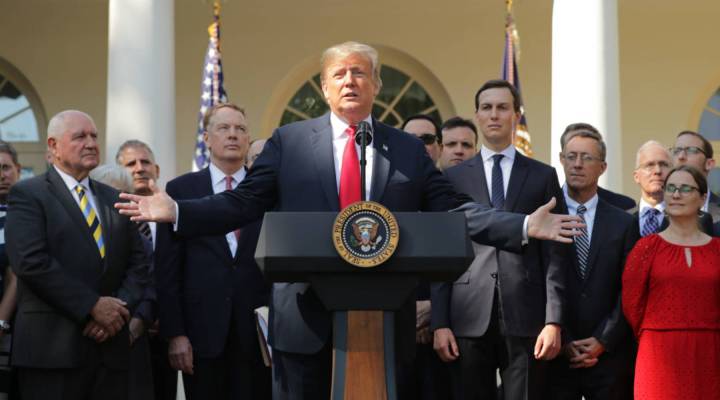 President Donald Trump discusses a revised U.S. trade agreement with Mexico and Canada in the Rose Garden of the White House on Monday in Washington, D.C. Chip Somodevilla/Getty Images

The United States, Canada and Mexico have just struck a new trade deal after several months and rounds of tense negotiations.

The pact, now called the U.S.-Mexico-Canada Agreement, or USMCA, will give American farmers greater access to Canada’s dairy market and require automakers to make more of their vehicle’s parts in North America (if they don’t want to pay tariffs).

President Donald Trump said he plans to sign the updated version of NAFTA by the end of November, which will then be submitted to Congress for approval.

“The factories were leaving, the jobs were leaving, people were being fired,” Trump said about NAFTA at a Rose Garden press conference Monday. “We have negotiated this new agreement based on the principle of fairness and reciprocity. To me, it’s the most important word in trade.”

But that principle of “fairness” and “reciprocity” can look very different depending on which workers or industries you’re talking about. Here’s a look at who might benefit and who might be disadvantaged by this new agreement.

Trump hasn’t made his disdain for NAFTA a secret, calling it the “worst trade deal ever made” and a job-killing “disaster” for the United States. (Note that experts say NAFTA both cost and created jobs.) So this new pact counts as a victory for Trump now that he’s been able to alter the original agreement and get Mexico and Canada on board for a new deal.

The United States’ copyright period generally lasts 70 years after the creator’s death, which the new agreement isn’t going to change. But the agreement will now push Canada’s current copyright terms, which stood at 50 years past the author’s life, to 70 years so that it can fall in line with U.S. protections.

The United States already tends to own a lot of copyrights, according to Laura Dawson, director of the Wilson Center’s Canada Institute. Meanwhile, Canada and Mexico tend to be more focused on consumer protections.

Kind of. The major U.S. stock indexes showed gains this morning, with the Dow rising more than 250 points (a gain of nearly 1 percent.) But Julia Coronado, an economist and the founder of the company MacroPolicy Perspectives, told us that while this market rally is probably a reaction to the agreement, the pact itself is rather “unimpressive.”

“This is a pretty narrow deal. There are a lot of things unresolved,” she said. “It actually complicates certain aspects of the auto sector production and trading.”

Farmers in the states will have greater access to Canada’s dairy market now that Canada has agreed to drop its Class 7 pricing system, which allowed processors in Canada to buy skim milk from Canadian farmers at lower prices.

“Nothing but good news here for the U.S. dairy industry. Class 7 milk pricing in Canada caused problems for U.S. manufacturers in two different ways,” said Eric Meyer, the president of HighGround Dairy in Chicago. “First, it stopped the flow of ultra-filtered milk, a concentrated skim solids ingredient that was used to boost protein content in cheese and yogurt made in Canada. Second, the pricing system allowed for Canada to be competitive to export their excess skim milk powder, taking away market share from the U.S.”

On the flip side of Canada’s more open dairy market, the country’s own farmers may be negatively affected. The Daily Farmers of Canada, an organization that represents Canadian farmers, has issued a statement criticizing the agreement, saying that it will limit exports and make them give up nearly 3.6 percent of their dairy sector.

“We fail to see how this deal can be good for the 220,000 Canadian families that depend on dairy for their livelihood,” the group said.

The agreement will extend patents on biologic drugs, which includes the Crohn’s disease medication Humira, from eight to 10 years. Experts warn that this could cost the health care system by pushing up the price of generic drugs.

The agreement will enable automakers to qualify for zero tariffs if 75 percent of their cars’ components are made in the United States, Canada or Mexico (an increase from 62.5 percent under NAFTA), and it also aims to improve wages for autoworkers. But these part requirements mean that companies may not be able to obtain them as freely, which could mean higher manufacturing costs. Those costs could then get passed on to consumers in the form of higher car prices.

And don’t forget that the Federal Reserve just raised interest rates, which may mean higher auto loans for you.