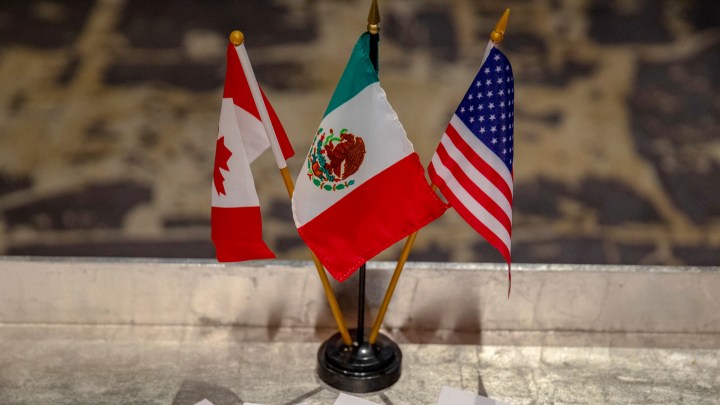 The group has deep pockets that Cox says it’ll use to get the U.S.-Mexico-Canada Agreement, or USMCA, pushed through Congress.

“We’re going to spend more than $8 million in August, everything from television advertising, broadcast, cable, digital and we’re working with governors for their states,” Cox said.

Some argue Congressional recess is when the real work gets done, when lobbying groups pull out all the stops to get policies passed. Cox is hoping his group can galvanize the public to get in the ears of their representatives and urge them to ratify the agreement.

The U.S. Chamber of Commerce is lobbying along the same lines.

“We’re telling members of Congress: ‘You can’t say that you’re pro-business and not vote in favor of this agreement,’” said John Murphy, head of trade policy at the chamber.

Murphy said members of the manufacturing and agricultural community stand to gain the most, not least because they’d have more certainty over trade conditions.

Dan Ikenson at the Cato Institute agrees something needs to be in place soon, but he says the USMCA is only marginally different from the current NAFTA agreement.

Democratic members of Congress have long argued they want stronger labor standards in the agreement if they’re going to sign on. But economist Ray Perryman in Waco, Texas said that’s not the only thing policymakers are worried about.

“The biggest pushback that I’m hearing from people is not so much what’s in it but the fear that things won’t be enforced,” Perryman said. “That the new labor contract in Mexico won’t be enforced.”

This week, a group of 14 House Democrats sent a letter to Speaker Nancy Pelosi urging her to bring a vote by the end of the year on USMCA.

“To me, it just doesn’t seem to make political sense for the Democrats to accept this deal in its current form,” Wood said. “And it makes a lot of sense for them to wait until after the presidential election in 2020.”

He says this agreement isn’t simply about politics in the United States, either. Every country has local constituents, Wood points out, and those in power will usually do what they can to please them.

“During the USMCA negotiations, we saw how Mexico and Canada adopted a position which was, ‘no deal is better than a bad deal,’” he said.

Mexico has already agreed to the USMCA. Even if the United States ratifies the deal as well, Canada still has to do the same before it becomes a binding agreement.