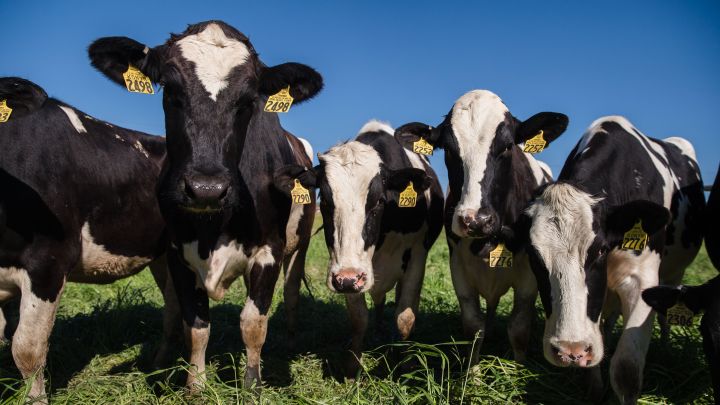 COPY
At its root, the disagreement has to do with the way each government tries to help farmers break even. Ariana Drehsler/AFP via Getty Images

At its root, the disagreement has to do with the way each government tries to help farmers break even. Ariana Drehsler/AFP via Getty Images
Listen Now

The Biden administration triggered a formal dispute mechanism of the new U.S.-Mexico-Canada Agreement (USMCA) for the first time yesterday against the Canadian dairy industry.

At its root, the disagreement between the U.S. and Canadian dairy industries has to do with the way each government tries to help farmers break even. “The Canadian approach is to maintain high prices by creating this quota system,” explained Christopher Sands, director of the Canada Institute at the Woodrow Wilson International Center for Scholars.

Canada tells farmers how much product they can sell and guarantees a price. “The U.S. does it differently,” Sands said; American consumers pay a tax that subsidizes farmers.

This new formal dispute accuses Canada of setting aside too large a share of the dairy market exclusively for Canadian dairy processors. A clever move by the Canadian government, according to Canadian and U.S. trade lawyer Mark Warner.

“Those guys don’t have really any incentive to import dairy,” Warner said. “So if you give the import quota to the large processors, well, they’re not going to import.”

Those producers will instead simply process Canadian dairy and avoid any tariffs. U.S. dairy farmers argue this denies them access to an important market.

“Canada has maintained measures that really run counter to its market access obligations under the trade agreement under USMCA,” said Krysta Harden, president and CEO of the U.S. Dairy Export Council.

Canada’s trade minister, Mary Ng, voiced her disappointment with the U.S. request for a dispute panel, saying she’s confident that her country’s policies are in “full compliance” with the trade agreement.

According to the International Trade Commission, if the USMCA were to be implemented as it was negotiated, U.S. dairy exports would go up by more than $300 million a year.