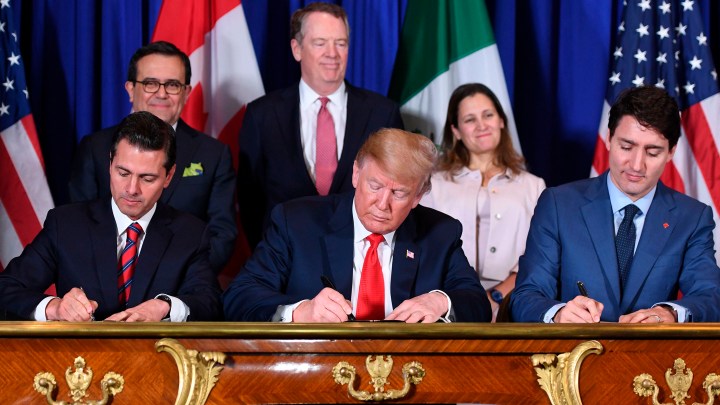 The pandemic has significantly slowed down global trade, but trade deals forge ahead. This week, the U.S.-Mexico-Canada Agreement goes into effect.

Negotiating a “new NAFTA” was a big campaign promise for President Donald Trump. The deal maintains a lot of the old agreement, but the USMCA does bring some changes.

Even though this marks the end to the almost 30-year-old North American Free Trade Agreement, “there will still be free trade across all of North America,” said Chris Wilson, deputy director of the Mexico Institute at the Wilson Center.

He said there are some changes that came out of long negotiations, like new labor and pay standards.

“Also, there will be a new set of rules of origin in the auto sector,” Wilson said. “And what that means is that more parts and materials will have to be made within North America in order for those cars to get that free trade benefit.”

“People who are concerned about the protection of labor rights are going to have access to a special rapid response mechanism to file complaints about the labor practices in Mexico,” said Simon Lester, with the Center for Trade Policy Studies at the Cato Institute.

So he says there may be a flood of litigation coming down the pipeline soon.