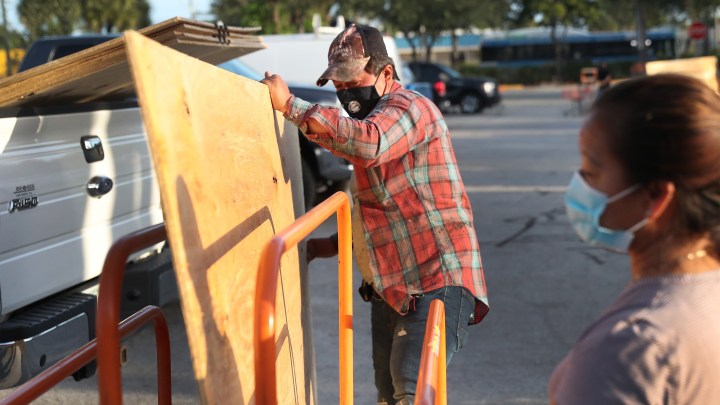 COPY
A Florida man puts newly purchased wood into his truck. Sales at home and garden stores in July were up almost 15% over July of last year. Joe Raedle/Getty Images
COVID-19

A Florida man puts newly purchased wood into his truck. Sales at home and garden stores in July were up almost 15% over July of last year. Joe Raedle/Getty Images
Listen Now

If you told Taylor Fenske in March that he was about to spend six months basically unable to leave his house, go to restaurants or travel? He would have expected to save a lot of money, he said. And he would’ve been wrong.

He has spent about $1,500 building a desk, TV tables, a plant stand, a nightstand and a corner table.

“You know, I wake up on Saturday just thinking like, what the hell am I going to do to fill my time today?” Fenske said. “So I just walk around until I see something that needs to be fixed.”

Retail sales numbers came out Friday, and sales were actually 2.7% higher than in July 2019.

This is exactly why. People have cut back on their visits to restaurants and bars. They’re spending less on clothing. But they’re still shopping.

Sales at home and garden stores are up by almost 15% compared to last year.

And they’re up almost 18% at stores that sell musical instruments, books and sporting goods.

Doug Hermanson, an economist at Kantar, has not had time to pick up any new hobbies.

“As an economist, obviously, work starts to ramp up when (global recessions) occur,” he said.

But he has been biking more — so he bought some exercise shirts and he’s in the market for a new ride.

“You’re not spending money on other places, and so you’re kind of focusing on that one area that you are able to be passionate about,” Hermanson said. “And yeah, that shows up in these numbers.”

Another reason retail sales are actually higher than they were a year ago? Online sales have also jumped by almost 25%.

The big question now is: Can this last without another relief package from Congress? Because without those additional unemployment benefits, people will have less money to spend on retail therapy.