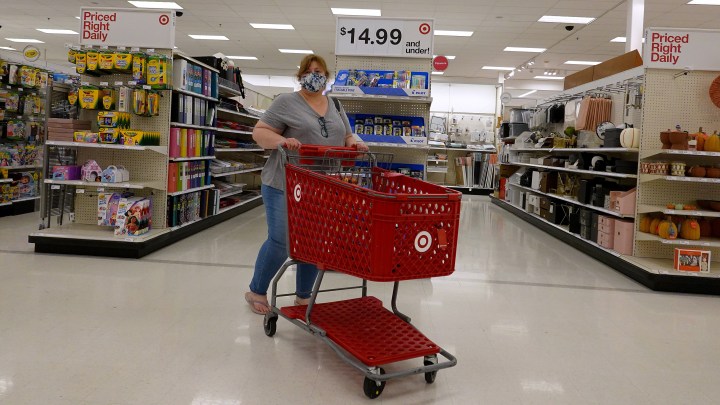 COPY
A woman shops at a Miami Target in September. While retail sales were up 16.3% year over year in October, inflation is eating up a lot of that increase. Joe Raedle via Getty Images

A woman shops at a Miami Target in September. While retail sales were up 16.3% year over year in October, inflation is eating up a lot of that increase. Joe Raedle via Getty Images
Listen Now

There was a general sense of buoyancy and good cheer on Tuesday. You saw it in the stock market and the general absence of gloomy narratives from economists. And you can chalk it up, in large part, to the U.S. Census Bureau retail sales report, which featured a much better than expected surge in spending by consumers in October.

Retail sales jumped 1.7% from September, and that’s on top of big gains in the previous two months. Year-over-year retail sales were up an eye-popping 16.3%. People were spending at electronics stores, home and garden stores, online stores, gas stations.

But that last one — a 4% increase in spending at gas stations — hints at something that’s really important to understand about this big surge in retail sales: While the number of “ka-chings” heard from cash registers are increasing, so are the prices. And those two things are connected.

I started this morning at my regular gas station, went inside to pay and — wow! It was $4.19 a gallon. It cost me about $1.50 more to fill up my tank today than last month.

In terms of retail sales, I didn’t buy more, I just paid more for it. This dynamic is driving about half the increase in retail sales right now, as retail sales are reported in nominal dollars, which doesn’t account for the effect of rising prices on those sales numbers.

This hasn’t been a big issue until recently, according to Michael Pearce at Capital Economics.

“Goods prices for a long time were basically stable, so we didn’t really have to think too much about how inflation affected these numbers month to month,” Pearce said. “But obviously now we’re seeing pretty extreme price gains. So, yeah, once you adjust that in real terms, it’s not as good as it looks.”

“I look at it — what is the consumer’s behavior showing? Are we still seeing a trend of consumers being willing to go out and spend?” Ladd said.

Consumers have been willing, in spite of rising prices. They know supply chains are messed up, products are delayed, and the holidays are coming, said retail analyst Natalie Kotlyar at BDO. So many are shopping early and grabbing what they can, even if it’s more expensive.

But “the consumer’s wallet is not infinite. Prices can go up only so much until the consumer says, ‘Enough is enough,’” Kotlyar said.

She predicts a pullback from the recent surge in retail sales once the holidays are behind us.