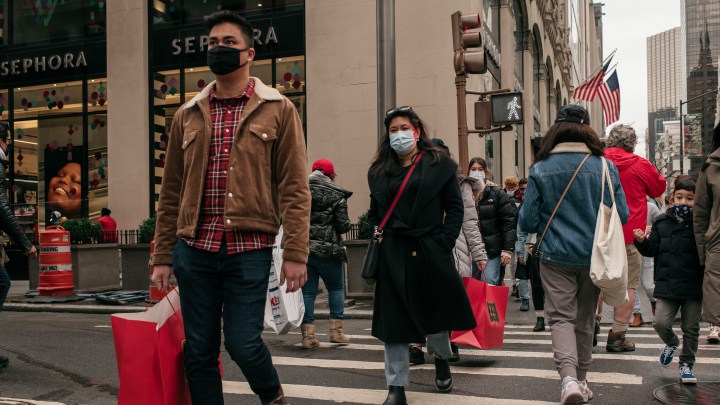 Mastercard just released its annual report on holiday spending, and it estimates that U.S. retail sales jumped by 3% this holiday season — higher than forecast, given that a lot of people are out of work and it’s unclear when the pandemic will end. This is not what happened in the last recession. During the holiday season of 2008, sales fell by more than 2%.

Steve Sadove, a senior adviser to Mastercard, said that was a very different recession.

In December 2008, he was CEO of the department store chain Saks. It had been a terrible fall, starting in September.

“You had the Lehman [Brothers] bankruptcy, then the market crashed, and you had in one fell swoop, a 25% decrease, at Saks, for example, in our consumption,” Sadove said.

As the holidays approached, retailers were sitting on a ton of inventory that they needed to sell, so they offered deep discounts. That cut into their sales numbers for the season.

This time around, the recession hit in the spring. So retailers had time to plan, and they took a different approach to the holidays. They stocked fewer items, but they held the line on discounts.

If you’re a retailer, that’s a way to protect your sales numbers. Sure, you won’t be selling as many T-shirts, but you’ll sell them at a higher price.

“It impacted people at every level of economic scale,” Rowley said. Whereas “this recession was driven by the decision to close the economy. It’s hit service people who work in restaurants, hotels, hospitality, retail, harder than everyone else.”

But he said many Americans still have disposable income and they’re spending it. We’ve seen that reflected in the government’s retail sales numbers, which in November, despite the pandemic, were 4% higher than the year before.