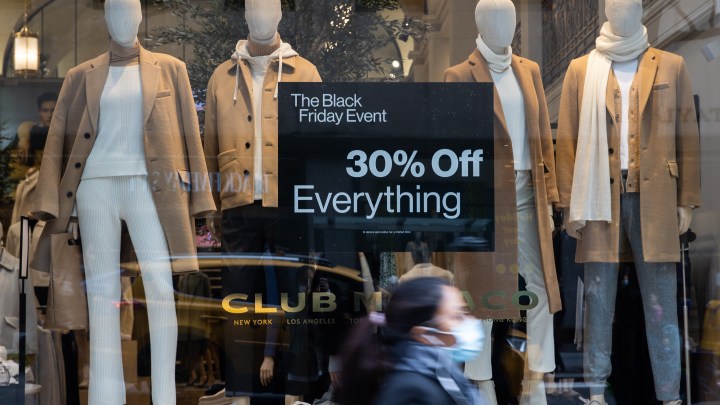 Let’s go back for a moment to the last recession, which started in late 2007. The economy was in the tank, millions of people had lost their jobs and their homes and retailers were desperate. So they started offering steep discounts, and that got people to shop.

But that strategy doesn’t really make sense this time.

“I think the real difference is that previously people still needed clothes to go to work, they still needed to wear makeup, etc., they still had things to buy,” said Tiffany Hogan, principal analyst at Kantar. “A lot of those end uses are kind of gone in the short term right now.”

In other words, you can put a blazer on sale for 70% off, but if I’m not going to the office, I’m not buying a blazer. Doesn’t matter how cheap you make it.

So this time around, retailers are trying to make a profit in a different way. They’re planning to sell less stuff but hold the line on prices.

It’s clear when you listen to recent earnings calls from companies including Gap, American Eagle, Dick’s Sporting Goods, L Brands — which owns Victoria’s Secret and Bath and Body Works. They all say they’re offering smaller discounts than they used to.

And that strategy kind of builds on itself. Because going into this fall and winter, retail executives said they expected demand to be low, so they bought less inventory.

“There was almost a risk of not having enough product for the holiday season,” said Sonia Lapinsky, a managing director at Alix Partners. “But it also allowed them to at least not have to be so promotional.”

Because customers will pay more for something when it’s in short supply.

Now the thing about the strategy retailers used during the last recession — it kind of created a monster with a long tail. Shoppers got used to the discounts and still expect them, more than a decade later.

“We’ve trained the consumer over the years to wait for the deal and wait for the sale,” Lapinsky said. “And this is actually giving some retailers an opportunity to shift that behavior.”

In other words, maybe this moment will be a sort of reset and create a new expectation that the price you see is the price you pay.